Take Back Our Public Lands 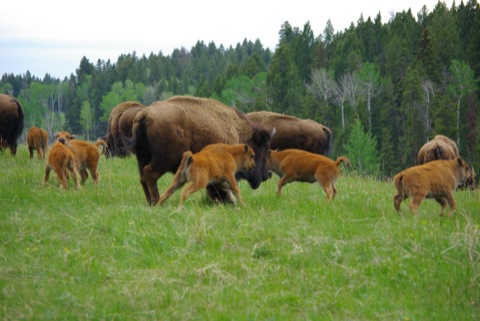 Addition by Ralph Maughan. This is also in New West. You can comment there as well as on this blog.

2008 should be remembered as the year of the buffalo. Over 1600 bison were slaughtered in Montana that year, about half of the last wild bison left in the world. This liquidation of wild bison is totally at odds with Montana’s strong conservation ethic, and is against our economic interest as well. In spite of this massive slaughter, Montana lost its “brucellosis-free” status due to repeated transmissions from wild elk to cattle. Also in 2008, the Government Accountability Office released a blistering report on bison management, finding no increased tolerance for bison, as intended by the management plan, and no accountability to those with a stake in how bison are managed, including Montana citizens and the many tribes that hold bison sacred.

The Bison Management Plan was adopted in 2000 “to ensure domestic cattle in portions of Montana adjacent to Yellowstone National Park are protected from brucellosis… and to ensure the wild and free-ranging nature of the bison herd.” It has failed on both counts.

Cattle passed the brucella virus to wild bison over a century ago. While these same bison mix freely with cattle in Wyoming without consequence, Montana refuses even to accord bison the status of “wildlife”—unless it is for the purpose of allowing them to be shot at close range by hunters. Now that brucellosis is endemic to Montana’s wildlife, what is the point of preventing bison from roaming freely with elk in our wildlife refuges and on our public wildlands?

The American Buffalo is an emblematic species. Millions of Americans travel to Yellowstone National Park every year to view and photograph them. And most Americans—including the Chairman of the House Sub-Committee on National Parks, Forests and Public Lands—are outraged by the continuing slaughter here in Montana.

Governor, how can you continue to justify this inhumane “zero tolerance” policy?

Brucellosis ceased to be a serious health threat to humans when we began pasteurizing milk in the 1940s. And unlike mad cow disease, brucellosis infected meat is actually safe to eat. The called-for “eradication” of brucellosis would require nothing less than a state-sponsored wildlife holocaust, as all elk herds in the Northern Rockies intermingle, and other wildlife species are carriers as well.
So is this an economic issue?

When a state loses its brucellosis-free status, as has now happened for all states bordering YNP without any implication of bison, the result is that cattle must be tested prior to export. While you have estimated this will increase the cost of beef production statewide by about $4M/yr., federal studies show that the actual cost to Wyoming has only been a 1% increase in total production costs—about $1.5M/year. The cost of bison eradication in Montana is $2.5M/yr. And according to a new study by independent wildlife experts in the Journal of Applied Ecology, the actual risk of disease transmission to cattle were bison allowed to roam freely into Montana would be zero in most years. ZERO! The study goes on to find that all the affected ranchers in Montana could be fairly compensated with a one-time expenditure of about $1.25M, thus eliminating any further risk.

Now consider the economic value of restoring wild bison to Montana, Governor. According to U.S. Fish & Wildlife Service, 71 million wildlife viewers in the U.S., including 755,000 in Montana, contribute $45.7 billion to the economy a year – equivalent to the amount of revenue from all spectator sports, casinos, and ski resorts combined! Wildlife watching already accounts for over $3.7M in retail sales in Montana every year, though 34 states rank ahead of us. Imagine how our ranking would improve with free-roaming bison along the front range and the Missouri River!

Governor Schweitzer, why won’t you develop this lucrative source of revenue for Montana by accommodating bison migration on our wildlands instead of slaughtering them at our border?

Here’s a simple win/win solution that reflects real Montana values. Make livestock owners responsible for livestock disease control, and manage public wildlands for native wildlife. We can help livestock owners secure their ranches from encroachment, while restoring the diversity and abundance of fish and wildlife that make Montana “the last best place” to live. Removing private livestock from public wildlands where elk feed and bison migrate not only will minimize deadly conflicts, it will also allow public streams and the sagebrush steppe to recover from the ecological damage inflicted by over a century of unwise use. While most commonly associated with sage grouse, sagebrush habitat happens to be the most biologically diverse habitat in North America. Let’s restore it.

Governor Schweitzer, take back our public wildlands. Restore our natural wildlife heritage, while improving the economic future of all Montanans.