Want more elk? Then take back the public grass that cattle eat

Elk numbers depend not just on birth minus mortality, but on square miles of area where they can find something to eat-

There are many places in the West where elk could live and thrive if they had something to eat, but they don’t. Livestock is the reason.

Aside from those areas of continuous forest with little for elk to eat and the hot desert, the typical case is where cattle and sheep eat up to 90% or more of the forage. Unlike with deer which are browsers, elk are more like cattle and sheep. Elk do browse many kinds of brush and trees. They are “mixed feeders,” and need grass and forbs as about 50% of their diet.

Most of the Forest Service and BLM public lands are broken into grazing allotments for cattle and sheep. Repeated visits and data collection by Western Watersheds Project and others show that livestock often eat 90% of  the grasses that elk could eat and sometimes more. In addition, this heavy grazing temporarily or permanently reduces the productivity of the grass and forbs by weakening them and allowing poorly edible and non-edible plants and shrubs to increase. This includes alien invaders like cheatgrass and medusa head. Cheatgrass changes the fire regime serving to create frequent fires eliminating other grasses and the browse, often creating a near mono-culture.

Where alien plant invasion has not been too severe, reduction or elimination of livestock can sometimes create a quick bounty for elk. Other places will take much longer to restore from abusive grazing by livestock.

But how about an example?

Twenty miles south of Pocatello, Idaho and just west of Malad City, Idaho are the Pleasantview Hills. The Pleasantview grazing allotment of about 60,000 acres has very few elk, and some deer. Every canyon bottom save two recently reclaimed from cattle is trashed, grazed down to dirt, with even the stream channels trampled out. The typical bad example below is of West Elkhorn Canyon in these hills (actually mountains). 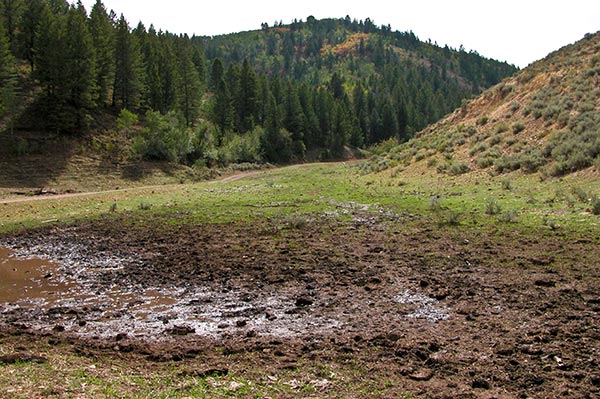 Not much left for elk, although you can see it would be elk habitat if the canyon was lush with grass.
What could the canyon look like?  Don’t take my word as mere speculation.

After many years of non-compliance with the grazing allotment plans, the Pocatello BLM kicked the cattle (at least partially) out of two canyons in these hills — Wood Canyon and Sheep Springs Canyon. Upper Wood Canyon is still grazed.

The photo below shows the growth of grass in Wood Canyon. Three years ago it looked like the photo above. 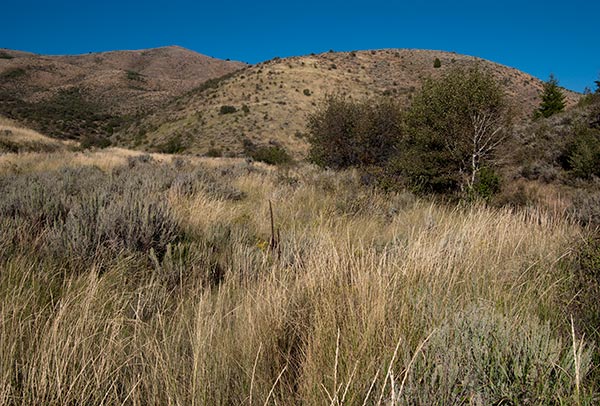 The middle reach of Wood Canyon. Sept. 2009. It was bare dirt except for the sagebrush 3 years earlier. PHOTO Ralph Maughan 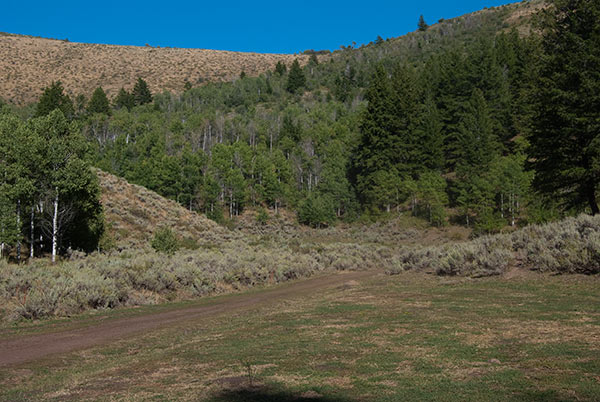 Don’t believe this canyon was ever like the first photo? I took the photo above on the very same day just 1/2 mile up Wood Canyon at a slightly higher elevation where grazing is still allowed. At this higher elevation you might expect even more luxuriant grass, but hardly!

In 2008, the first year of the livestock closure, we saw a moose in Sheep Springs Canyon, something I thought I’d never see in this area.

This photo, which I posted to Google Earth shows the uneaten grass (2 to 7 feet tall) in the bottom of Wood Canyon on Sept. 9, 2009. It’s too bad there are no elk to utilize it, although it is serving to rebuild the soil and put water back in intermittent spring and creek in the middle of Wood Canyon.

6 Responses to Want more elk? Then take back the public grass that cattle eat