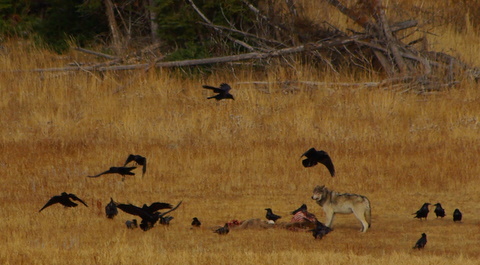 This is about the worst scenario for wolves of Montana that could be concocted by the state, especially while the decision to delist them is being considered in the courts. This nudges wolves even closer to a condition where the killing by a Federal agency becomes entirely unregulated. These conditions resemble those in place when wolves were eradicated in the first place. For those who think that Montana has a better management plan than the other states, think again.

This sets up a situation whereby Wildlife Services may kill an entire pack of wolves for killing a single sick cow or sheep left out on the landscape, a circumstance often documented by those who are watching. This does, however, put a greater responsibility on the agency that has actually made the call on how these situations are handled. Wildlife Services can no longer claim that FWP made the call on how the situation was handled when things go awry.

At the same time, livestock producers who use public lands have no requirements to do anything to avoid such circumstances.  The removal of livestock carcasses that have died natural deaths, or the removal of sick animals, is not required as part of the authorization to graze on public lands.  Non-lethal methods which have been demonstrated to be effective deterrents against livestock depredations are not required.  These poor livestock husbandry practices will continue and be rewarded by livestock compensation programs in place and being proposed by the government.

Will this action influence Judge Malloy’s decision on whether to remand the decision to delist wolves back to the USFWS?  Will Ed Bangs see this as a reason to change his decision?  Time will tell.