It’s not true, and on Monday the U.S. Senate will vote on his amendment that would lock in the noise for a lot more time, according to the Sierra Club. Of course you would be wise to do your own research, but below is the Sierra Club alert on this. 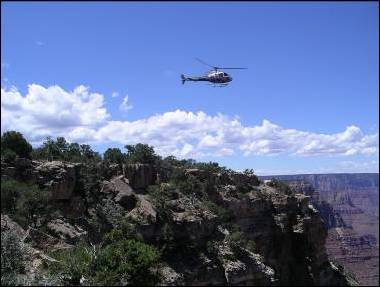 Timeline: The Senate votes on the destructive McCain Amendment MONDAY AFTERNOON.  (may become part of FAA Reauthorization Bill unless blocked).  Discussion and voting all afternoon and into evening on FAA bill.

McCain Spin: “The Arizona senator is tired of waiting for the FAA and NPS to reach an agreement over restoring ‘natural quiet.’”  (AP Mar 17, 2010)

The Facts: Yes, we have waited since 1987 to get a good management plan for the Grand Canyon.  The Park Service has completed the new plan and is ready to release it in April, in just a few weeks! McCain’s ‘midnight rider’ amendment is a gift to the air tour industry.  Together with the Nevada senators, he is back-stabbing the Park Service just when they have completed their work. McCain’s amendment would legislate existing noisy conditions and stop progress.  The McCain amendment is a direct attack on Grand Canyon National Park on behalf of the commercial air tour industry.

During the 1987 Senate floor debate, McCain said “When it comes to a choice between the interests of our park system, and those who profit from it, without a doubt, the interests of the land must come first.”  We think this applies in 2010 as it did in 1987.

Please Help: Call Monday, and/or the weekend. E-mail your Senators now.  Ask to talk to a live person and tell them that the Overflights Act amendment is 1) destructive to the Grand Canyon, and 2) unnecessary because the Park Service is ready to release the draft environmental impact statement that will present the preferred management plan, and 3) cuts out all those who love the Grand Canyon from having their say.

Please also call or e-mail Senator Mark Udall (202-224-5941), chair of the National Parks Committee, with the same message, thank him for  his efforts underway to block or modify this dangerous amendment.

3/22 Note: McCain withdrew his amendment. Thanks everyone!