Were more or fewer wolves killed than expected?

People will ask that question, but it’s hard to answer because there were so many different predictions. I said “it depends.”

Here are some stories.

185> 187 188 wolves were killed in the hunt that lasted as long 7 months in some places. The statewide quota was 220 wolves. So the quota wasn’t reached, but the various hunt zones all had sub-quotas and many of these were filled and some filled relatively quickly. All told, 5 of the 12 hunt zones did not meet their quota.

The zone they fell the most short in was the controversial Lolo hunting zone where for a long time the claim has been there are huge numbers of wolves and few elk.  I discount that more and more as time goes by because wolves have to eat and if there are just a few elk (the case since 1996) how can there be very many wolves?  Wolves aren’t omnivorous. They can’t eat berries while an elk herd grows to a size that will support the wolf packs thought to exist.

If you look at the 2009 Idaho wolf report, the hard count of wolves in the area (21 wolves) is 6 less than the hunt quota of 27, with the rest of wolf packs just names in the wolf report, complete with ghostly boundaries. All told, 13 wolves were killed there during the long season.

There is no doubt the elk harvest has been poor in the Lolo for about 13 years, as the Fish and Game graph below shows. I see in a recent news story Idaho’s director of Fish and Game said elk hunting used to be great. That’s true, but as you can see, that was 20 or more years ago. I don’t think there ever was the number of wolves present many people thought because the elk prey base collapsed before wolves even appeared on the scene (the first wolf pack was about 1997). Even if there were a huge number of wolves, they probably migrated to nearby hunting units or just disappeared.

The Montana hunting season, in contrast to the Idaho hunting season, closed quickly as that state’s quota was met.  Montana’s wolf quota was lower than Idaho’s but not that much lower proportionately. I think the most likely explanation is that wolf hunting is easier in the open landscape of Montana.

Next year, if the federal court allows a wolf hunt to be held, Idaho is expected to have a higher quota and more “generous” (less sporting) hunting methods allowed. The Idaho Fish and Game Commission seems to be in grief that more wolves were not killed, and that the Idaho wolf population has stabilized rather than fallen sharply.

It seems to me a moderate Fish and Game Commission could maybe just call the whole thing even and ratchet down the controversy with next year’s hunt with a few adjustments and a similar quota.

Update 4/1/10: Here are the numbers of elk graphed from the chart found here.  Note that the rate of decline appears fairly consistent over time. 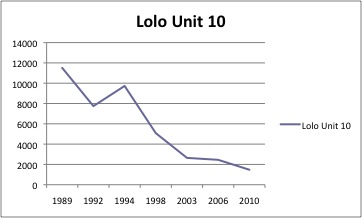 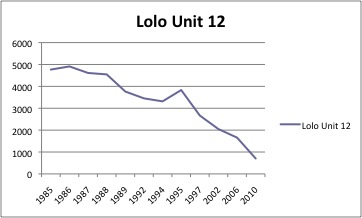