Beaver in our Midst

A guest article by Mike Settell 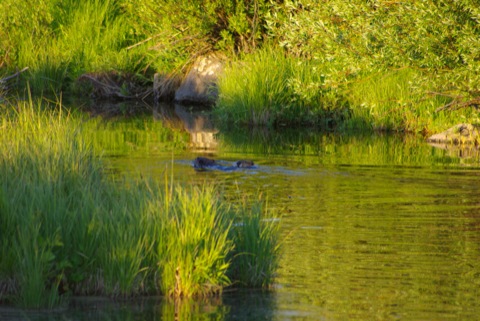 On June 26th, 2010, I inspected the South Fork of Mink Creek to document conditions of the Box Canyon road culvert that was being plugged by beaver.  Like many roads throughout the west, the South Fork Road parallels the creek and so problems with the road-creek interface are, at best, managed.  From its confluence with the West Fork of Mink Creek, the South Fork extends to its headwaters near the southern flank Scout Mountain in southwest Bannock County.  In the spring of 2010, I had seen no less than 25 beaver dams as far as the headwaters.   I was eager to see how the beaver were doing.

As I followed the South Fork upstream, I noticed that the dams I had seen the previous spring were failing, a sign that the beaver were no longer working in the area.  As I rode towards the Box Canyon Crossing, I observed more and more abandoned dams and receding water levels.  By the time I reached the end of the road, four out of five colonies were abandoned.

I continued riding through the canyon up to the gentle plateau that forms the upper South Fork drainage.   It was here that I hoped to see again the massive beaver ponds and the expanded willow acreage that ten years earlier was little more than dead sticks surrounding a marginal trampled, eroded stream.  Now, these colonies were also gone.   What once was a stream with approximately 35 potential cutthroat rearing ponds is now a silty, slithering stream, losing velocity and flowing muddily towards the Portneuf River.

At the Box Canyon road intersection, the plugged culvert was potentially damaging the road but Castor canadensis had created wetlands and deep ponds suitable for Yellowstone Cutthroat upstream of the culvert on the South Fork for two years.   Seeking a more synergistic approach, the West Side Ranger District’s biologists Chris Colt and I wanted to install a “Beaver Deceiver”.   A wire mesh panel attached to steel stakes, the Beaver Deceiver discourages beaver from plugging road culverts by confusing beaver’s hydrologic instinct.  It was the first such deceiver installed on the West Side.   When we arrived, there was no sign the beaver were in the area.  We installed the Deceiver in hopes that it might prove useful in the future. 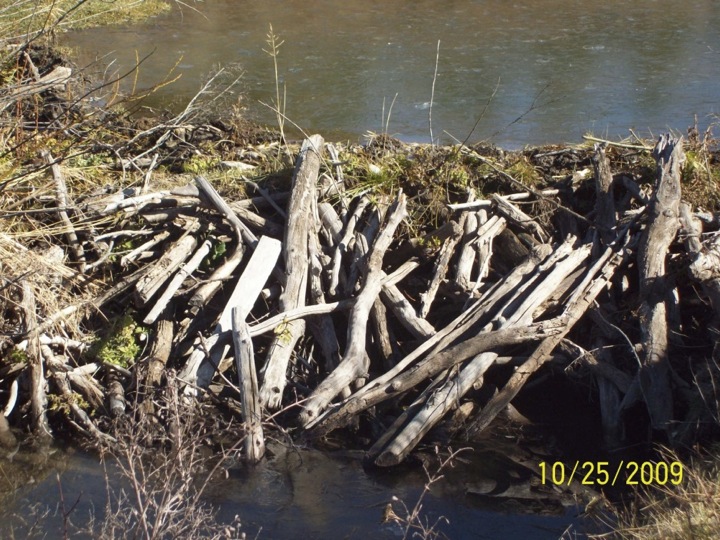 Toponce Creek, Box Canyon, East Fork Mink Creek, and Rapid Creek are other streams where beaver were two years ago and are now MIA.  The Box Canyon colony created a pond that was so large that kids and parents were seen leaping from the top of the road and landing with a splash in the pond.  Now, it was little more than a mud pit for motor heads.  What happened to the beaver?

There are a number of plausible beaver removers.  The Caribou National Forest may want to remove the beaver that keep the maintenance crews busy digging out the mass of trees, mud and rocks from the culvert.   Recently, however, the District Ranger, Jeff Hammes, proposed relocating parts of the troublesome South Fork Road up and out the flood plain in part to allow beaver to co-exist in the Forest.   Indeed, the Caribou District has completed other non-lethal control measures such as wire wrapping beavers’ favorite trees near the Bannock Guard station to accommodate the beaver.  It was not consistent for them to trap them out.

Hobby trappers are another likely candidate.   Streams in the region are open to trapping so some folks kill and skin the beaver for fun and (some) profit.  During the last “Rendezvous” I attended at the local trapping supply hut, the regional buyer was paying on average $25 for a large pelt.  The buyer claimed his company’s warehouse in Burns, Oregon was full of unsold pelts.   There are a few trappers who seek the historical connection with trapping but in reality few of today‘s white trappers would survive long during the trapping hey-days of the 1820s.  But that‘s another story.   Some trappers might be induced to poach and are akin to hunters that kill a trophy buck, cut off the head and leave the carcass.  That said, poachers run the risk of getting caught.  Somewhat.

If the laws and rules are violated, trappers can be fined.  Some rules are found at http://fishandgame.idaho.gov/cms/hunt/rules/ug/furWeed.pdf (Yes, that’s “weed” in the address.   Beaver are ranked with knapweed, thistle, and dyer’s woad).  In summary, these rules state trappers must:

Toponce Creek was closed to trapping by IF&G five years ago and a trapper should know that it’s closed.  Admittedly, it’s not easy to find the regulations for trapping, so it’s understandable that a trapper may be unaware of closed areas, however, that has seldom been an effective defense for fish and game violations.  Violations for other game species are severe.

For taking an elk out of season, violators face a $500 fine, six month’s jail time, and loss of license for life.   Take a beaver illegally, and violators may lose $25 fine and loss of trapping privileges for a year.  Depending on the time of year the infraction occurs the poacher could trap again within one season.     (Idaho Fish and Game may levy a $1,000 fine for possession of an illegally taken animal, but I could find no record of that applied to a beaver poacher).  While there is scant deterrent for poaching, the low pelt values elevate the risk above the reward.  Who else might afford to take the risk? 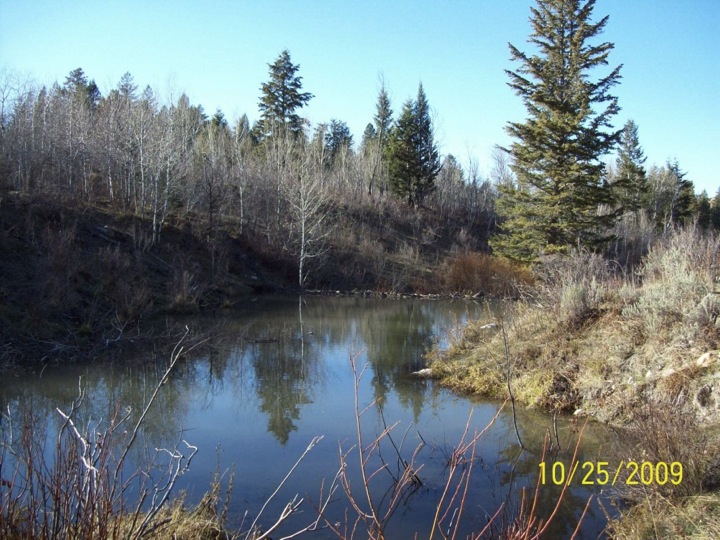 County road crews dig out plugged culverts, golf course groundsmen save trees on the 17th fairway, riverside campground operators prevent flooding, riparian-sited hobby farmers keep fences up, and city managers work with residents whose apple trees have been cut by beaver.  Ranchers historically have shot beaver on site, but more recently, ranchers are teaming up with beaver because they recognize beaver keep water on the range.  Animals are also removed by car strikes, predators, disease, natural attrition and migration.  But typically, if the beaver have suitable forage such as occurs in the South Fork and other drainages, colonies will survive these other threats.  Who else would have an interest in systematically removing entire colonies in a reach?

Idaho Statute Title 36 Chapter 11, Section 36 (http://legislature.idaho.gov/idstat/Title36/T36CH11SECT36-1107.htm) requires the Idaho Department of Water resources certify whether the landowner is losing water flow due to beaver.  From this, one can see that water users might be culprits in beaver eradication.  Not to say that such filings don’t occur, but I have never heard of one and neither has the local Fish and Game conservation officer.   Hiring a water lawyer for 15 minutes would cover the maximum poaching fine if a poacher were caught.  In no case are water users justified in trespassing on Federal ground to remove beaver.  That’s due to a little known rule called Federal Reserve Water Rights, but more on that later.

In the past, some Idaho Fish and Game offices have issued a so-called nuisance permit to kill beaver with no follow-up or documentation on the number, location, and time beaver were killed.   When I conducted an informal survey of the eight regional offices in 1999, I found only two that maintained records of the nuisance permits.   Some offices reported issuing permits, “over the phone” with no documentation at all.  Indeed, it is most likely that many animals taken by water users are well below the population statistic radar and are lost to oblivion.

When working his last years for the Hudson’s Bay Company, Peter Skeene Ogden became remorseful about the declining population of the beaver.  He had reason to feel bad.  At that time, beaver were the equivalent to the oil of today and whoever controlled the beaver controlled the land.  So, in a vain attempt to keep Americans out of the Oregon Territory, the British government told the Company to embark on a scorched earth program and exterminate the beaver.  The effort failed, we got the Oregon Territory but in the process nearly all of the beaver were wiped out.  It must have felt like suicide for Ogden who trapped an average of 4,000 beaver per year for 10 years.

In describing his first visit to the Portneuf River near present day Pocatello in 1826, Ogden wrote,

“…when we encamped on a fine large fork commonly called Portneuf’s Fork in our travels this day our first four miles was over a low swampy country so much so we could not find a [camp]” and, “A finer country for beaver was never seen and not only in appearance but in reality, we shall certainly on our return pass some nights here, when the waters have subsided”.

In Ogden’s time, it was an over-abundance of water that caused newcomers problems.  Today, it is the ever critical shortage of water but in both cases, it is the beaver that was and is the benefactor.   Will we amend our laws and statutes to save this animal?   Does it need saving?  Instances have been reported of irrigation companies dynamiting beaver dams on public land in order to increase the flow of water.   In southeast Idaho, court cases wind their way through the courts attempting to assign water flows from Federal land using practice that remains controversial because conservationists believe that America’s Forests are imbued with an inherent water right for wildlife and fire suppression.

To get more water companies can inflate flows temporarily by killing a beaver, breaching the beaver dam and then measuring the flow as the water gushes out for a short period.  This artificial high flow could inflate the flow rate for long enough to increase a junior users diversion rate.   What happens when the ponds finally drain?   This is the exact same scenario that occurred during the turn of the century with the Colorado River.    Flow was estimated during the wettest spring on record and consequently a small farm community called Los Angeles Basin swelled into a megalopolis.

While it’s not certain that this is the sole reason for the loss of the beaver in my area, the fact that the entire population was “trapped close” could have the effect of increasing the flows.  In any case, the beaver has to bear the brunt of man’s short-sighted foray into watershed management.  Only time will tell if folks get interested in an amazing furry rodent considered less valuable than weeds by the state.

34 Responses to Beaver in our Midst