There is an excitement about the recovery of wolves in Oregon, much as it was in the early day of Idaho and Montana before local reporters found it easier to write a story about a dead cow than the restoration of our wildlife and wild country.

In the month of October the Oregon Department of Fish and Wildlife (ODFW) got 50 wolf reports. “12 wolf reports were from the west wolf management zone (11 sighting reports, 1 howling report), and 38 from the east zone (28 sighting reports, 9 track/scat reports, 1 howling report).” The Imnaha Pack continues to exist despite county commissioners’ concern about their minor affect on livestock rather than the sorry economic condition of the human residents of their counties. They do have a sophisticated GPS collar on the alpha male and the data received is interesting. As ODFW describes it, “The GPS radio-collar downloaded 239 GPS location data points in October. The pack continues to spend the majority of its time on the Wallowa-Whitman National Forest and Hells Canyon National Recreation Area with 183 (77%) of the GPS locations. In October, the pack was on private lands for 56 (23%) locations. The pack spent time in two counties, 173 (72%) locations were in Wallowa County and 66 (28%) were in Baker County.”

So the wolves move about a lot.

Now famous wolf OR7 who is a 2 ½-year-old gray male that dispersed from the Imnaha pack in September has, as reported earlier, continued to travel SW. The figure below shows his travels from Eastern Oregon into the southern Cascades. 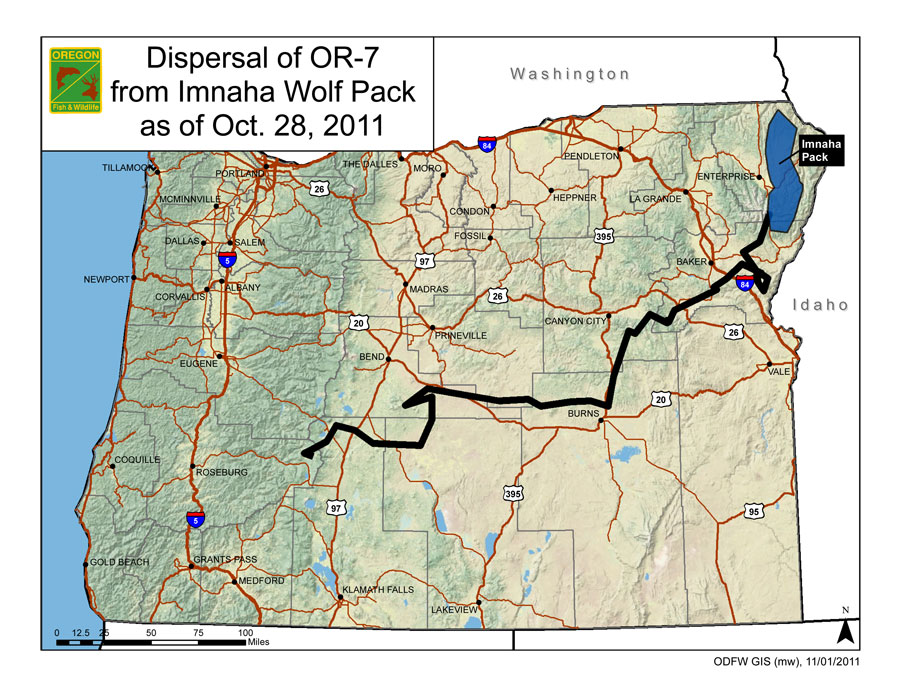 The newly discovered Snake River Pack near the Idaho border probably has 5 members. Only one member of last year’s Wenaha Pack has been seen, but there are probably more.

The new Walla Walla Pack has six !! members and ODFW has photos of the family. See the pack (photos). There might be a new wolf pack in what is called the Mt Emily Unit – north of the Umatilla River.  ODFW found scats and tracks. These wolves might also be part of the Walla Walla Pack.

Controversy and legal action continues to swirl around the Imnaha Pack, but they are protected for now by a count stay. Regardless of what happens to them, the pack gave Oregon wolf recovery a huge lift.  Folks should remember that.

Oregon wolf conservationists (Cascadia Wildlands, the Center for Biological Diversity and Oregon Wild) continue to have success keeping the state wildlife agency from killing the last two members of the Imnaha Pack. Of course, now it has been so long since the original kill order for the last two wolves was issued, that killing them would be pointless.

25 Responses to News about Oregon wolves