USDA Wildlife Services Funding Shortfall Has Strange Result in Montana. Big game tags for big landowners to auction off dies in the Idaho Senate…. not quite

Remaining woodland caribou in U.S. (in Idaho) barely holding on

Tiny herd spends most of its time in British Columbia-

The woodland caribou have been on the endangered species list for a long time, several million dollars have been spent on their conservation. That might sound like a lot, but it is a total over many years. They depend on old growth rain forest, living mostly on lichens that grow on the trees. 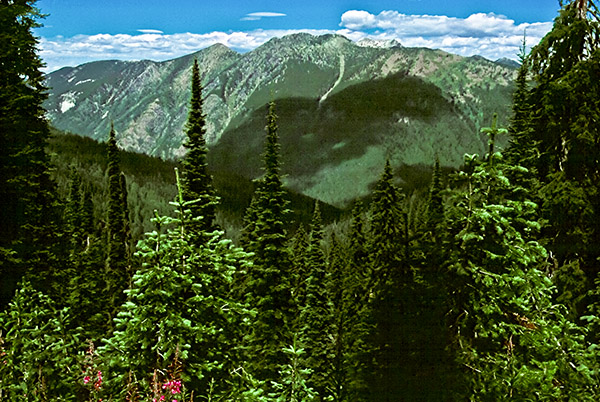 Across the South Salmo River in woodland caribou habitat on the Idaho/Washington/B.C. border. View is northward in the Salmo-Priest Wilderness Area. Copyright Ralph Maughan

The big decline in woodland caribou (not to be confused with the abundant barren ground caribou) in the United States came before the 1960s. Once, they had ranged along the northern border from Washington State to Maine.   The only one of the 48 states that still has them is extreme northern Idaho’s Selkirk Mountains.  Here a herd of about 45 struggles, spending most of its time just over the international border in B.C..  At one time they ranged well south in Idaho, all the way to the Clearwater River, and reports from the 1880s (trapping records) show they thrived despite an abundance of wolves.  By the time the 1950s arrived, the herd was down to about 100 caribou. From there they slowly declined to just 30 animals. This prompted a transplant from further north in B.C.   The net effect was to raise the herd into the mid 40s. In other words, most of the new caribou didn’t make it.

The reasons for the decline are complicated. Unregulated early day hunting and logging of the immense north Idaho rain forests played a key role. Since then some continued logging, road building for timber access and creation of habitat good for mountain lions has played a role. If you visit the country you will find that many of the old logging roads have been closed and have grown in.

Once a population declines to a small level, any number of random events can take them out, but the U.S. Fish and Wildlife Service soldiers on, having recently declared about 370,000 acres in the area “critical habitat.”  This doesn’t mean much on the ground, but does give a legal handle to prevent expansion of snowmobiling, ATVing, and proposals to cut more old growth forest.

Some local people want to give up, having never even seen one of them they don’t see any benefit, but know it might inhibit the creation of areas for their machines to ride. If the herd disappears, that will be it.  The woodland caribou now is in steep decline all over western Canada because of the direct and indirect effects of logging and industrial development which eliminates old growth forest and creates transitional habitat good for deer and their predators, wolves and cougar. These predators kill caribou as well as deer though the caribou provide almost none of their diet due to their present rarity.  The are just no caribou available for a second transplantation into this U.S./British Columbia “South Selkirk” herd.

It will probably be luck and a change in Canadian politics if the woodland caribou survives anywhere.

35 Responses to Remaining woodland caribou in U.S. (in Idaho) barely holding on