The project to install 66, 275 foot tall wind turbines directly below the heights of Great Basin National Park, Nevada is now well underway as the April 22, 2012 photo shows.  Nevada’s first wind farm, which will disturb almost 15 square miles, was approved by the BLM without even an environmental impact statement. It  impinges on the ice age relict Swamp Cedar National Area sacred to the Western Shoshoni tribe.

Great Basin National Park celebrates the Snake Mountain Range, topped by 13,000 foot Wheeler Peak. The wind turbines also block much of the highway view of the Mt. Moriah Wilderness area, also in the Snake Range, but a bit further north. 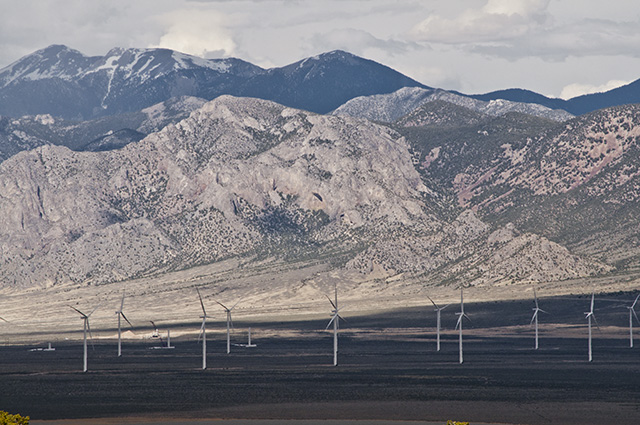 Some of the new wind turbines in Spring Valley. View is across Spring Valley to the northeast. The Rose Guano Cave is seen in the cliff in the center of the photo. Photo copyright Ralph Maughan. on April 22, 2012

While wind turbines do kill birds, they are especially hard on the vital insect-eating bats. The bats do not get chopped up in the turbine blades.  Instead the bats explode after they pass the turbine blades and move into the low pressure area behind them.  It turns out the Spring Valley turbines lie right below the Rose Guano bat cave (see photo) which briefly harbors as many as 3-million migrating bats in the fall.  The project is slated to begin producing power in July 2012.  The project is also expected to harm the imperiled sage grouse. These vulnerable slow flying birds will not tolerate living near tall perches for raptors, e.g., wind turbines.

Back to the bats, most folks are aware they are in steep decline in the United States. The reason is the importation of deadly white nosed fungus from Europe. Bats eat an incredible number of insects. As such, they stand as yet one more fraying link between us and insect plagues and  a host of insect borne diseases like West Nile Virus.

The Western Watersheds Project and the Center for Biological Diversity tried to get the BLM and a federal district court to halt construction.  A few changes were made to accommodate concerns. While the developer,  Pattern Energy predicted that a couple hundred each of birds and bats would be killed, now they promise to actually monitor the number of deaths.