With the exception of the Yellowstone population and a few other small herds of bison which came from Yellowstone, virtually all of the buffalo in in the U.S. are hybrids with cattle genes. The amount of genetic material from cattle may be small but there has been debate about whether it can affect the fitness of the animals. According to a new paper in Conservation Biology it may. 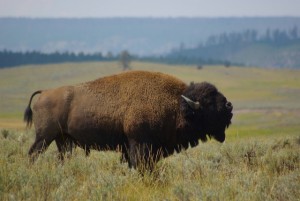 As the researchers explain in a statement released with the paper, “plains bison (Bison bison bison) once numbered in the tens of millions, but they were driven to the brink of extinction in the late 1880’s during America’s westward expansion. A small population of wild bison survived in Yellowstone National Park, while 5 herds remained in the hands of private ranchers. It is estimated that less than 100 surviving bison became the common ancestors of today’s herds.”

Some of the bison that remained in the hands of ranchers were hybridized with cattle in an attempt to make them more docile and more able to withstand harsh winters. These bison have become the most numerous and are widespread across the country.

The researchers examined different populations of hybrid bison and found that those with particular cattle genes (the mitochondrial DNA which is passed only from the mothers to offspring) are smaller and may therefore be less fit for survival over the long term than those without these genes. There may be other traits caused by cattle genes which can reduce the fitness of the animals too but these weren’t identified.

It has been shown that there are at least two distinct breeding populations within Yellowstone that may be disproportionally affected by these large culling events leaving the possibility that one or the other breeding population could lose genetic diversity in a single winter.

It is important that Yellowstone bison be allowed to use habitats outside of the Park on a year round basis so that there remain enough bison to maintain the genetic diversity of these invaluable herds. The annual culling events must also cease and bison must be allowed to inhabit other areas in the case of a catastrophic event, such as disease or other event, which may eliminate or severely reduce the Yellowstone population.

Bison must have a metapopulation structure which allows for immigration and emigration from one population to another to maintain genetic diversity. This would more likely ensure the long term survival of the species which for centuries was an integral keystone species for North America.