Air quality in Idaho right now is the worst in a generation in many places, and we’re not even speaking of places immediate to the fires.

Three fires in particular the the biggest smokers.  The Halstead fire north and northeast of Stanley and the Trinity Ridge fire, continue to expand and burn a lot of standing and downed timber — heavy fuels that will at best smolder well into October, maybe November. The Halstead fire is burning down (eastward)  the West Fork of the Yankee Fork of the Salmon and the mountains to the south toward the main Yankee Fork. On Aug. 17 evacuation of the Yankee fork right from its mouth at Sunbeam all the way upstream was ordered.

We have written about these fires extensively in the past.  Currently Trinity Ridge seems to be making the most dangerous run.  It is over 80,000 acres in size.   The fire is threatening its first town — Featherville, Idaho.  This afternoon, August 18, ‘the Elmore County Sheriff ordered an immediate evacuation of the Featherville area from Featherville to the Paradise area because of thick smoke and reduced visibility due to the Trinity Ridge Fire. Pine Featherville Road is now closed to all but Fire and emergency traffic.” This is a vacation town with about 900 structures, mostly second homes. 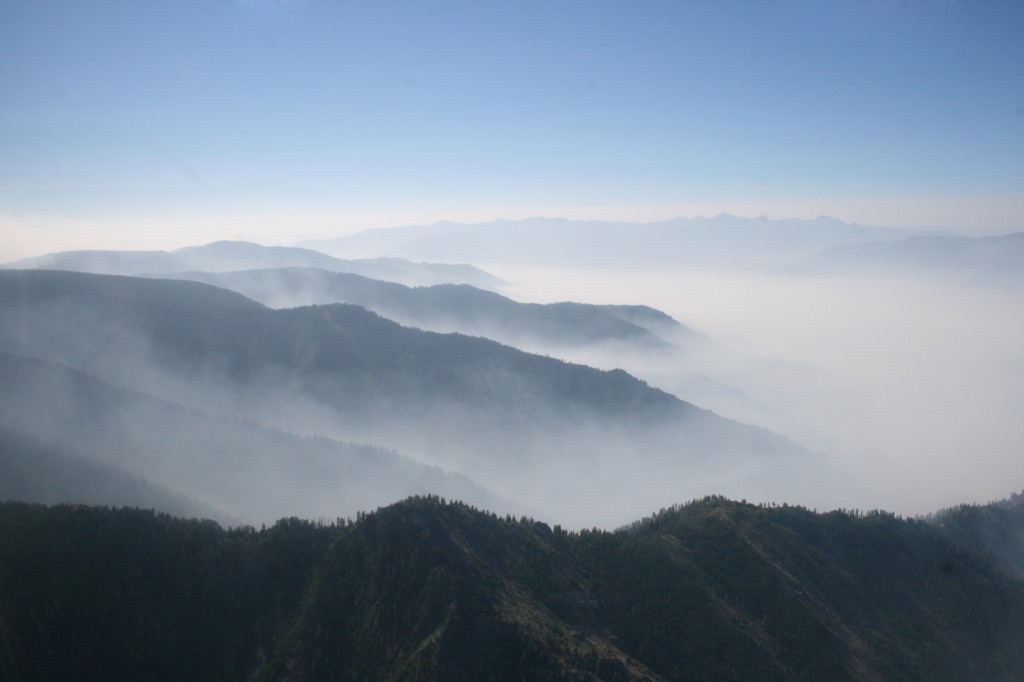 A relatively new “complex” of fires has emerged to challenge the other two as producers of smoke and flame, especially drifting to areas northeast of the other two — West Yellowstone, Yellowstone Park, Montana.  This is the Mustang Complex, which is burning on top of the rugged Salmon River Mountains NE of Salmon Idaho.  The fires have cut off  the Salmon River road, a vital route for recreation deep into central Idaho, including those who float the Middle and Main Forks of the famous Salmon River.  The Salmon River Road was closed on Wednesday, Aug. 15, at Cove Creek to anyone who is not a resident of Colson Creek. River recreationists should check in at the North Fork Ranger Station at the intersection of U.S. 93 and Salmon River Road for updates on closures and road conditions. For general fire information, contact the fire information center at 877-356-8984.”

The Mustang fires are now burning over 85,000 acres of the steep Salmon River Mountains, filling the deep Salmon River canyon with choking smoke in the mornings before it billows out to the east and southeast as the morning inversion breaks up. Most of the firefighting originally consisted of keeping the fire from burning down into the canyon and destroying structures.  Now, however, the fire has burned down into the canyon to its bottom all the way to the bank of the main Salmon River in many places, and could jump it to begin burning the south bank of the canyon and up into vast Wilderness area beyond.

In addition to these 3 fires, others currently of lesser note in Idaho are smoking hard, e.g., the Springs Fire and Lost Packer Fire.  It is also essential to add that an often thick stream of smoke is being lofted from northern California fires and Northern Nevada and SE Oregon fires into Idaho.The long term story ought to be what an immense change has been wrought in the ecology and scenery of central Idaho from wildfire over the last 20 years.