Of Wolves and Trophic Cascades: On the Costs and Benefits of Wolves (Updated 5 Sept.) Wyoming elk herds have grown too large

9/3-2012. Update: check with Inciweb for latest evacuations along or near U.S. Highway 93, North Fork, or in the Montana portion of the fire (such as Hughes Creek). These evacuation levels have been increased.

Next year, visitors who head down the Salmon River Road from North Fork, Idaho (assuming the highway crossroads of North Fork still exists) are going to find a transformed landscape. Burn will stretch from the Salmon River north, rising up 4000 to 6000 feet to the mountain crest north that runs east-west for many miles.  There might be a burn along the canyon bottom from North Fork westward all the way past the mouth of the Middle Fork to the Corn Creek put in and well beyond. In fact, this is already almost a given. 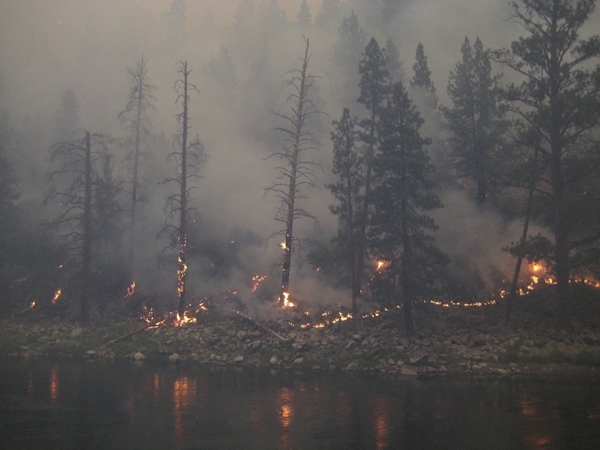 Here is the web page for the fire at InciWeb.

Lighting strikes started this fire in a number of spots on July 30. They were on the tops of the ridges, well in the backcountry. They soon burned together, and over the month + 3 days have burned in all directions.  The fire seems to expand by roughly the same percentage each day, meaning in absolute acres, a greater acreage each day. The fire did not stay on the mountain tops for long.  It burned down the steep, rugged ridges and canyons to reach the Salmon River far below for many river miles.  Next year you might enter a burnt roadside from North Fork on the east downstream perhaps all the way across the Frank Church Wilderness going west.  The fire is also spotting a long distance. This has caused it to continually move closer to the Idaho/Montana highway artery U.S. 93 to the fire’s east.  The Mustang complex now includes Montana. It burned over the state line in the backcountry several days ago and is now well into the Montana. In addition, ” The Mustang Complex and Lost Packer Fire have now grown together and continue to spread toward the Cabin Springs Fire to the west. There is a future potential threat to West Fork, Sula and Darby Ranger Districts on the Bitterroot National Forest of Montana. Today 9/3 a spot fire started on the south side of the Salmon River downstream from the last road. Instead of a much feared conflagration deep in the Frank Church Wilderness, it was extinguished.

For those who remember protected area boundaries from back in the day, it looks like the fire might burn out what was before 1980 the old “Salmon River Breaks Primitive” area, plus additional partially developed backcountry.  Lightning strikes and spots continue to ignite and the Mustang Fire Complex has at least eight satellite fires now burning well to the west of the main fire.

Wildfire has a number of wildlife benefits and harms, with most of the harm coming in the first few years after the burn. The Salmon River Mountains where the fire is burning are granitic mountains, eroded out of the vast Idaho Batholith. This is usually a soft granite  — quite subject to erosion into large grained “sand” particles.  A burn over such an immense area and of such amazing relief will certainly release huge amounts of sediment into the main fork of the Salmon River from its deep and steep tributaries such as Horse Creek, Big Squaw Creek, Spring Creek, Indian Creek, Colson Creek, etc.  This will have a large effect on boating (river running) , fishing and trying to conserve the struggling salmon and steelhead trout.

Idaho’s other two big forest fires, Trinity Ridge and Halstead are now 145,000 and 131,000 acres and burn fiercely. Update  9/3 on the Halstead Fire. The fire has burned to the ridge just above Idaho Highway 75 in the upper Salmon River Canyon and the Salmon River. The highway has been closed off and on. Beginning at 7:00pm September 2, 2012 traffic on Highway 75 between Stanley and Challis will be escorted by a pilot car. The affected section is from Lower Stanley to Peach Creek (mile marker 206.6). Smoke, fire equipment and potential falling debris from the Halstead Fire has necessitated this action to protect motorists’ safety. Escorted traffic will continue until fire conditions change.

The Halstead Fire’s “progress” is being hindered by relatively recent burns adjacent to the fire’s perimeter. These old burns, of course, usually have a lot less fuel  to sustain the fire. In the last day or so, however, the fire has burned deeper into the southeastern part of the Frank Church Wilderness and burning at surprising high altitudes in the Pinyon Peak and Vanity Lakes country. The fire often just barely ignites snags or downed logs at the very top of the cirque basins. These smoulder, catch fire and roll down into the adjacent cirque basin, thus spreading the fire despite sparsely timbered and rocky ridgetops.

Yesterday firefighters did an innovative kind of back-burning to stall the advance of the Halstead Fire on the west. They started back-burns from the air by dropping plastic spherical devices (PSDs)  a.k.a. “ping-pong balls.” These are made to get a  back-burn going in  a random and so a scattered pattern. The effect is to do the back-burn without burning so many trees and creating a desirable mosaic of burn and unburned, rather than a complete burn.

Incident: Halstead Wildfire in the Yankee Fork
Released: 1 day ago
There are 9 small spot fires that are all within half of a mile of each other that have spotted across to the east side of Yankee Fork Road. All 9 fires are being staffed with the support of helicopters making bucket drops. There are 3 handcrews (25 firefighters each) that have responded to that area. The wind was blowing straight west across Yankee Fork road. Yankee Fork remains under an evacuation order.

The Trinity Ridge Fire (9/2) has been stopped on the south (South Fork of the Boise River) by fireline construction and back-burns in the Featherville area, apparently saving the homes (mostly second homes) in the popular area. People can come home. The huge fire  is also being held so far from crossing the North Fork of the Boise.

Regarding the fire’s continuing spread and some containment, InciWeb says, “Fire continues to back down from Sheep Mountain to the west in the Sheep Creek, Pete Creek and Repeat drainages to the confluence of the North Fork Boise River and Middle Fork Boise River. Fire continues to spread toward Green Creek. Fire behavior is minimal where it runs into old burns.”

Rocky Barker at the Idaho Statesman has covered and written extensively (articles and books) about forest fires and their effects on the management of Western public lands. He has a good article today (9/2) on these Idaho fires in historical context. Don’t be misled by the article’s headline. It is a very poor description of the article’s content which is broader and more interesting than the unfortunate “Old burns slow new fires across Idaho”

One point he makes and many people should be making is that the numerous central Idaho fires in recent years is reverting forests back to a considerable degree to what they were like after the great inferno of 1910 and after. After that gigantic burn which had immense political effects on forest management and fire control, Idaho’s central forests slowly became terrific elk habitat in many places. It didn’t become so immediately, but over a generation it did.  The abundant elk from that period’s early to mid-term forest regeneration is in part the dream that some hunters are still chasing.  Unfortunately, they let wolves keep turning their dreams into nightmares, but regrowth to a younger forested condition will (assuming there is no radical climate change) restore the elk, not predator control.