Cygnet Fire burns right in the middle of Yellowstone Park- 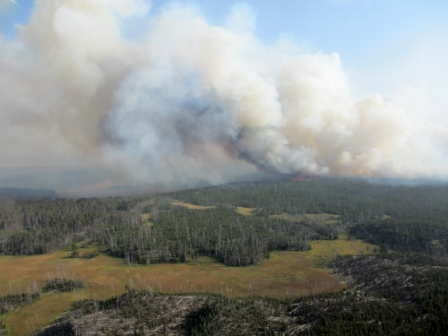 The fire is in the backcountry about 3-4 miles south of Virginia Cascades and is sometimes causing smoky conditions over the Norris to Canyon road.  This is in a little used (by humans) area of rolling to flat topography with a lot of forested terrain.

Although the grandaddy of all fires was in Yellowstone Park and outside its boundaries in 1988, it does have some moderately large fires (2000 – 5000 acres) every 4-5 years.  In 1988 over a million acres of the 2.2 million acre park burned. Regeneration has been excellent. As elsewhere conditions for fires are now extreme in the Park.

Update Sept. 14. The Cygnet Fire has grown to just short of 4000 acres. However, it has stalled out for the time being — no growth the last several days. This coming Saturday, 9/15, has predictions of low humidity and perhaps strong winds that could stir things up. It is beginning to get below freezing most nights now and they are longer. This gives the fuel less time to dry out and to burn hard during the sunlight hours. 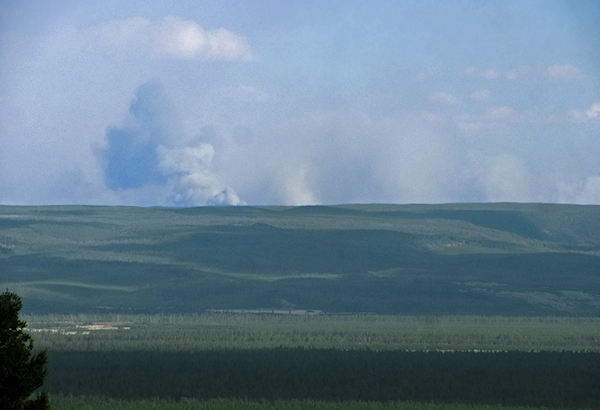 Update. Sept. 16. The fire is now at 4400 acres. This is from InciWeb on Saturday the 15th. ” Very low relative humidity, gusty west winds and warm temperatures combining with very dry fuels will produce optimum conditions for rapid fire spread. Increased fire and smoke activity is expected on the Cygnet and Dewdrop fires burning in the central portion of the park. These conditions will prevail until a cold front moves through the region early Sunday morning, which will bring cooler temps and possibly some much needed moisture.” [boldface ours]

As of 10 AM Sunday rains have not developed. Chance of T-storms is 30%.

– – – – –
Here is an interesting map. It shows the perimeter of the Cygnet Fire when it was 2800 acres, but perhaps more interesting is the map shows the location of old forest fires in the Park by date . . . a fascinating fire history as well as a guide to places where the Cygnet Fire is unlikely to burn (due to lack of fuel).