Have you come across any interesting wildlife news? Nov. 22, 2012 Sportsmen’s Heritage Act fails in the U.S. Senate (Updated)

Fishing problems in the upper Clark’s Fork of the Yellowstone

High angling pressure and spread of rainbow trout the problem-

It’s not like fish have disappeared from the Beartooth Plateau or the streams of the nearby Absaroka Mountains, but the fisheries accessible without a long walk or pack trip are in decline.

The Clarks Fork of the Yellowstone River rises far up in the Beartooth Mountains, just NE of Yellowstone Park and then tumbles down and out of Montana into Wyoming where after about 10 miles it runs into a deep hard rock gorge to emerge in a stream valley in the plain and coulee country of Wyoming and SE Montana. Along the way it picks up many more streams from the Beartooths and the rugged Absaroka Range on its SW and south side. 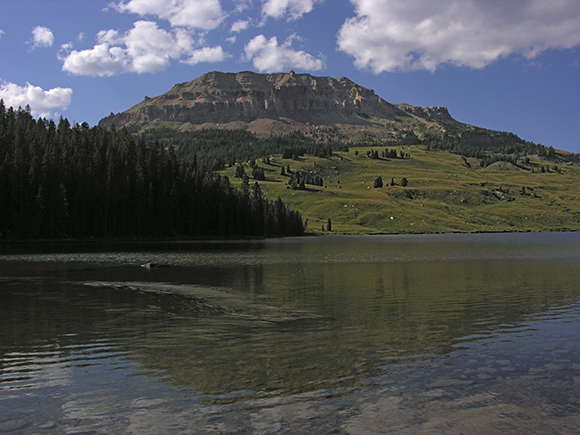 The famous Beartooth Highway cuts climbs up from the Clarks Fork to the Beartooth Plateau and crosses it at almost 11,000 feet. Then the highway   drops down, taking people to Red Lodge, Montana. Along the way the people love to fish the accessible alpine lakes of the Plateau and also some of streams coming in from the largely largely lakeless Absaroka.

The beautiful scenery can make up for a poor catch in part, but the catch has been declining.

If a person is willing to hike or pack deeper in the Beartooth Wilderness there are scores of lakes and ponds with fish. These lakes support many kinds of trout and a few grayling too.  Of course, most people lash the waters of the lakes with fish near the Beartooth Highway, particularly Beartooth, Island, and Long Lakes.

These 3 lakes and some of the Wilderness lakes get far more fishing pressure than natural reproduction can support due to the attraction of the scenery, the slow growth of trout at this high elevation, and the fact that they contain the wrong kind of trout for the conditions.   In addition, most of these lakes lie in glacier-scoured granite basins with resultant clear, beautiful, but infertile water.

The 3 large roadside lakes are stocked and many of the Wilderness lakes are too. It is important to remember that most of the Beartooth Mountains were originally fishless because barriers such as waterfalls prevented the migration of fish to the headwaters of the Clarks Fork and other rivers. Fish were introduced to the lakes in a chaotic fashion. Some fit the lakes. Others soon died out and still others produced abundant but stunted brook and/or rainbow trout.

The Wilderness Absaroka Mountain fisheries have a different story. These are less visited, but equally rugged mountains. Of volcanic origin, they have very few lakes despite their towering height. There were some native cutthroat trout fisheries in the stream, but the migration of stocked rainbow trout  up the Clarks Fork into them have produced instead hybrids which have not thrived for various reasons.

The stocking of sub-alpine and alpine lakes, which were often fishless throughout the Western United States seemed like the natural thing to do, but it was done long ago in most cases, without a plan, or contradictory plans. Now the various Wildlife or Fish and Game Departments of the states are trying to straighten things out and deal with a new problems such as the spread of diseases and non-native species.

This story on the fisheries of the upper Clarks Fork is just a microcosm.