Are Ranchers Stupid? Alberta ranchers bluster about grizzlies too

Boise. ID. When you drive or hike into this east central Idaho high country (Idaho’s highest mountains), you would expect to see pristine creeks. On the Salmon-Challis NF, however, one is usually disappointed. The creeks are sacrificed to appease local ranchers with tiny amounts of extra grass (in the short run).

These cattle abused creeks high in the scenic Lost River Range are getting some legal love from the Western Watersheds Project and their law firm, Advocates for the West.

On Wednesday, April 10th, Western Watersheds Project (WWP) filed a Complaint in Federal District court in Boise, Idaho challenging the Salmon-Challis National Forest, the US Fish and Wildlife Service and the Bureau of Land Management for violating a number of Federal Statutes by authorizing illegal livestock grazing in Idaho’s Little Lost River watershed.

A small, isolated population of bull trout clings to existence in the Little Lost River watershed. Spectacular scenery of rugged mountain ranges and snow-covered peaks like Bell and Diamond Peaks in the Lemhi Range, and the magnificent Lost River Range, provide the backdrop for one of central Idaho’s most scenic landscapes. Federal agencies have been unwilling to tackle the livestock grazing impacts that are causing soil erosion, loss of perennial water flows, streambank trampling and loss of bull trout habitat. Instead, piecemeal projects have strung barbed wire back and forth across the stream.

At lower elevations, the Idaho Falls BLM has turned a series of riparian exclosures built to remove cattle impacts to sensitive riparian zones into “pastures,” claiming that for some reason the cattle that graze inside the exclosures have no effect on the creeks. Even casual inspection shows that the exclosures have eroding cut-banks where past grazing damage has caused stream entrenchment and gullying.

In the headwaters on the Forest Service Wet Creek and Mill Creek drainages, very small headwater streams and tributary springs and seeps are in very poor condition.

In places in Wet Creek, the water stinks of livestock waste. If one wades across the stream, plumes of brown sediment muck cloud the water. Small aspen-lined spring drainages are dying altogether as livestock trampling causes headcuts that drain the waters above. 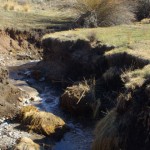 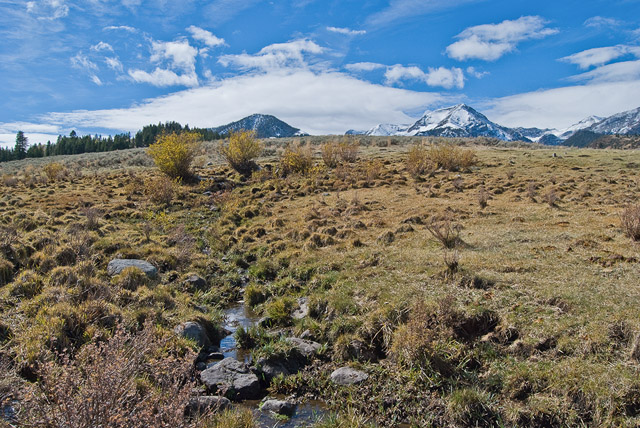 A headwater tributary of Wet Creek. High in the Lost River mountains a cattle degraded creek festers at its source. The humps are unnatural features caused by cattle standing in wet meadows. Copyright Ralph Maughan

In its required consultation that the USFWS accepted as legitimate, the Forest Service and BLM looked at only limited effects of grazing. They never considered the total “hoofprint” of cattle and other disturbances in these watersheds.

So in order to better gauge grazing impacts, WWP sought to work cooperatively with the Forest to monitor grazing use. WWP  supplied and built heavy large wire cages that provided a comparison between grazed and ungrazed areas. After one season, the Forest, possibly under the political thumb of the livestock industry did not like clear visual comparisons of impacts between protected and unprotected areas and ordered the cages removed.

WWP  is being represented by Kristin Ruether and Laurie Rule at Advocates for the West, two noted attorneys who have won many cases against federal bureaucrats who their critics say have been “cowed.”

Read the complaint to the court. WWP vs. USFS and USFWS).