Western wolf issue is mostly not really about wolves Do you have some interesting wildlife news? June 5, 2013 edition

Time to get outdoors before the skies fill with wildfire smoke

Most recent years have had a big downside in July and August, so plan-

I spent yesterday in the mountains of Eastern Idaho. I didn’t go to the highest mountains where there is still snow and green-up is just beginning.

The eastern Idaho valleys and lower mountains are filled with green grass, fresh foilage, wildflowers, and river waters that are now losing their snowmelt turbidity.  Some places in Idaho, Wyoming and northern Utah are now well past their peak of Springtime beauty and wildlife. 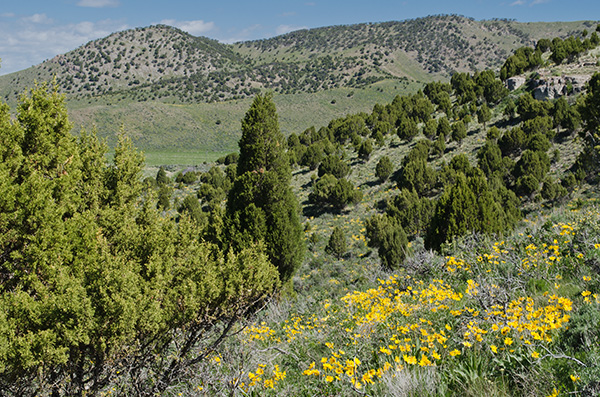 The Northern Rockies had a cold spring which partially offset the winter snowfall, which was generally below normal (assuming that drought is not the new normal).  Montana just got a big splash of cold rain, especially east of the Continental Divide. Northern Idaho is not in drought. Southern Idaho, which is droughty, didn’t see tall growth of grass due to the low precipitation and the slower growth of a cold spring, though range fires will likely soon begin to break out, beginning in the lower, hotter area of SW Idaho.

May and June are usually the peak wildlfire season in Arizona and New Mexico. Wildfire danger there is already high to extreme. The last couple years have seen very large wildfires and conditions are again favorable to this.

Last summer the skies of Idaho, Colorado, Utah, Wyoming and Montana were filled with smoke from mid June to early October. Wildfire seasons in the forests have been ending in October in recent years. It used to be September.

This year, so far, the skies of these states are nearly smoke free except from the Powerhouse fire burning north of L.A.  You cannot expect this to last and people need to start thinking of June as the prime outdoor recreation month in the inland Northwest, plus Nevada, Utah, Colorado and Wyoming.

A million acres of central Idaho burned last summer and early autumn.  I plan to see the beginning of the recovery before it is (likely) on fire again.

Advances in satellite technology applied to the web now provide us with very interesting and useful maps of pollution and smoke. In particular see, U.S. Air Quality