Next to last of grizzly 399F’s adult cubs killed

Put down for eating too many cattle-

For those who have been in the upper Green River downstream from the Bridger Wilderness, it could be one of the prettiest places on Earth and an American Serengeti. However, every summer thousands of cattle are put into the scenic area. Every summer, grizzlies, black bears, coyotes, wolves are killed because they can’t resist eating some of the overly (artificially) abundant bovines.  Elk, moose, and pronghorn  are crowded off to the side, though not killed directly.

Some people thought that 399’s cubs would get into trouble because they were raised in Grand Teton National Park in view of thousands of people.  Three of her five cubs were killed directly by people — this incident, one hit by a car, one killed illegally by a hunter (a big controversy a while back).  One died naturally as a cub. 610F is still alive, having raised a number of cubs of her own.

Grizzlies 399 and 610, plus their cubs, have been the subject of many local news stories because they have lived in relatively small Grand Teton National Park, often inhabiting places visible to many people. Folks can find many photos of them on the web.

587M wasn’t the only grizzly to be shot on behalf of cattle ranchers in the upper Green River area this summer.  Two others (females) have already been shot as well. 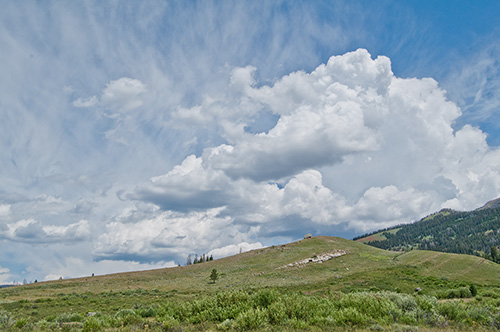 Jackson Hole News and Guide has the details.  I don’t like the headline of the story “Taste for beef kills cub of grizzly 399.”  There is no evidence that the bear had some abnormal taste for beef.  Cows are big, slow, numerous, and crowd our public lands. What would a normal bear be expected to do?