Do you have some interesting wildlife news? Sept. 6, 2013 edition So whatever happened to wolf OR-7

Deer, motorists to benefit from deer overpass on I-80 at Utah-Nevada border

Building overpasses over busy highways in notable spots where animals cross make a lot of sense in terms of safety of people and the animals.  We have seen several near Wells, Nevada and reported on them. Now one is nearing completion over Interstate 80 at Wendover, Nevada-Utah. It is 200 feet wide and cost 2.7 million dollars.  Fences direct the migrating animals toward the crossing, which is wide enough that they tend not to be frightened of the speedy vehicles beneath.

Properly constructed they can reduce the number of collisions to next to nothing.

Perhaps the most celebrated such crossing went up recently about five miles west of Pinedale, Wyoming (see photo below). It spans U.S. 191 to help the fabled pronghorn herd that migrates from Grand Teton National Park hundreds of miles southward to winter on the Red Desert of Wyoming. Development had just about chocked off the migration at a constriction point on the highway crossing near Trapper’s Point. The new bridge, of which the Utah-Nevada bridge is the same style, seems to be a success. 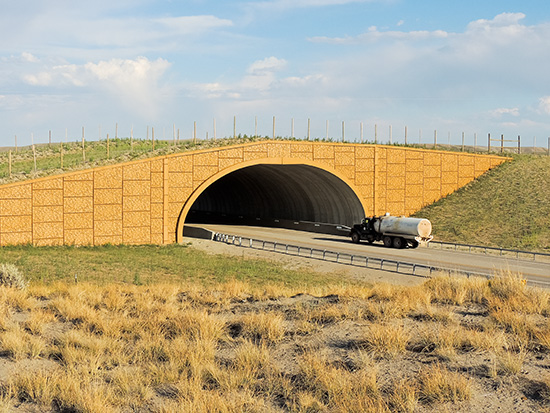 The Wyoming pronghorn crossing bridge on U.S. 191 near Pinedale. The I-80 bridge will be similar, but double in length.  Photo copyright Ralph Maughan. August 2013

I examined the U.S. 191 structure recently (see a photo of the Wyoming bridge to the left).  In the pronghorn crossing, two fences extend about a mile in both directions, one on each side of the highway. They are about a tenth of a mile back, parallel to the highway. This prevents the pronghorn from crossing elsewhere from the traditional point. There are also ancillary fences.

In the middle of both fences, a cone-shaped turn of the fence directs the pronghorn to the crossing bridge. From the air it looks like an hourglass. You can see it on Google Earth or maps.

We hope for more of these.

13 Responses to Deer, motorists to benefit from deer overpass on I-80 at Utah-Nevada border