All, that is except for the increasing boring deer and elk and some exotics-

The Wildlife News has not paid a lot of attention lately to the state of New Mexico, but it appears the state wildlife mangers and governor have the same attitude as Idaho, but New Mexico is a more advanced case.

In 2010, New Mexico elected a Tea Party governor, Susana Martinez.  She controls the state’s Game and Fish Commission. The reader will be able to gauge their attitudes quickly by their background and stated interests.   Do they look like commissioners interested in any kind of carnivores or rare kinds of fish or animals? They are interested in deer and elk, period.

There is one controversial exception. Unlike most states, New Mexico introduced a number of non-native exotic species from the Eastern Hemisphere. The stated purpose was hunting. The African oryx, or gemsbok is now well established. Persian Ibex were introduced and are beginning to expand out of the mountain range of introduction — the Florida Mountains.  Barbary Sheep (from Africa) are now well established in part of the state. Oryx, a large African antelope, were introduced at the White Sands Missile Range and now have a population of about 3000.

Oryx quickly invaded adjacent White Sands National Monument, requiring the construction of a landscape jarring fence, and a continuing program of removing the exotic from the national monument.

Going down the exotics path is not likely for Idaho. Cattle and sheep growers will oppose anything that might eat forage that could go to livestock.

Not unexpected, has been New Mexico’s relatively hostile reaction to the federal restoration of the small native Mexican wolf. Readers  are probably familiar with the folkloric tales of depredations of the 20-30 or so of these 70-pound wolves.

Meanwhile, there has been what amounts to an assault on the state’s native black bear and cougar. Intense trapping has more than decimated the state’s bobcats, fox, and ringtailed cats. Very large numbers of coyotes are, of course, killed; but that only causes even more coyote resiliencey due to the tremendous ability of that canid to recover and profit from high mortality.

Not surprisingly for a state that emphasizes deer and elk, New Mexico has a problem with nightmarish chronic wasting disease (CWD) in the southern part of the state. CWD from the state is now spreading into Texas. 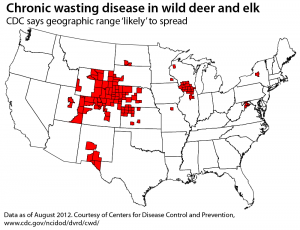 Jan Hayes of the Sandia Mountain BearWatch has an interesting commentary today in the Albuquerque Journal on the war on New Mexico’s native carnivores and effects of trapping on smaller carnivores.

13 Responses to New Mexico. Demise of its more interesting wildife