Oregon is perhaps the state with wolves that treats them the best. An official wolf count began in 2009 when 14 wolves were detected. Since then it has grown steadily though more slowly than did wolves in neighboring Idaho.

At the end of 2013, the minimum number of wolves was determined to be 64, up from 48 the previous year.  In 2013 six breeding pairs of wolves were found, but in 2013 that fell to four.  All the known wolves were in extreme NE Oregon, with the lone exception of famous wolf OR-7, named “Journey” by many folks. He lives in SW Oregon’s Cascade Mountains. He sometimes still ranges down into California.

Update: There just recently was a confirmed sighting that shows a second wolf has come to the Cascade Mountains. It was documented to be near Mt. Hood.

The packs are named Imnaha, Wenaha, Walla Walla, Umatilla River, Snake River, Mt Emily, Minam, and  “New Pack in Catherine Cr / Keating.” Snake River, Umatilla River, Minam and Walla Walla are the packs with breeding pairs. Minam is the largest pack with 12 wolves. In 2012 the Wenaha Pack was the largest with eleven wolves. This year Minam dropped to nine,  and were not considered to be a pack with a breeding pair of wolves.

There were two new packs detected in 2013 — probably five wolves in the “Catherine Cr/Keating Units.” This is near Medical Springs on the west side of the Wallowa Mountains.  Four wolves were detected northwest of LaGrande, Oregon and named the Mt. Emily Pack.  Mt. Emily came from a pair of wolves that had 3 pups last spring. Only one pup is thought to have survived and so Mt. Emily is not an official “breeding pair.”

All of the packs live (see map) in the part of the state where the federal government delisted wolves but they still have Oregon state endangered species status. Only OR-7 is in the part of Oregon where the federal government still maintains endangered species status for the gray wolf. The Snake River Pack spent 99% of its time in 2013 in the Hells Canyon Recreation Area, just across the Snake River from lethal Idaho. 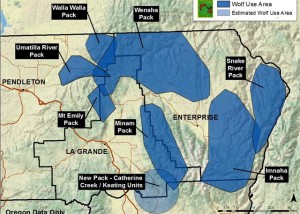 Map of Oregon wolf pack territories. 2013. By Oregon Department of Fish and Wildlife.

Most of the wolf packs are genetically related, but the Walla Walla Pack is unique, not related to the other packs.

The scattered size information released on the Oregon wolves shows that those captured and weighed were all somewhat small — less than 100 pounds.

Oregon wolves were unique in that within the state’s boundaries only one of them was killed by a human. Two former Oregon wolves did die when they migrated to Idaho. One was shot in the wolf hunt and one was trapped.

111 Responses to Oregon wolf population grows modestly in 2013, but breeding pairs down. Updated