When a local issue goes national, it is often warped into other political agendas. We see that clearly with Cliven Bundy’s 20 years of public land cattle trespass coming to a head.

A cursory search shows a sudden explosion of articles claiming Nevada’s senior senator, Harry Reid, wants Bundy’s land to build a solar plant to enrich himself and his son. Since Reid is the U.S. Senate Majority Leader, the radical right has every incentive to harm him by buying this false claim. Such a blatant lie needs to be exposed.

Cliven Bundy has been trespassing for 21 years over 750,000 acres of U.S. public land to the south of Mesquite and Bunkerville, Nevada. Part of this used to be called the Bunkerville grazing allotment. Bundy had a grazing permit to it. A U.S. grazing permit is not fee simple ownership of the land. It is a mere rental. Bundy lost his permit to graze by refusing to pay his rent. Bundy’s actual private property in land is his melon farm at Bunkerville, what looks like maybe 100 acres on Google Earth.  There is a solar farm under construction. But it is not on the huge swath of land on which Bundy’s cattle trespass.  The solar facility under construction is near the Moapa Indian Reservation about ten miles closer to Las Vegas than Bundy’s place.

The Wildlife News has been critical of many solar farms in the desert because of the massive destruction of wildlife habitat, but this farm under construction is not one of the dangerous mirror farms like Ivanpah near Primm, Nevada/California. It is a photovoltaic farm and it is being built to allow decommissioning of the Reid Gardner coal generation station nearby. Reid Gardner is one of the dirtiest coal plants in the nation. In addition, the new solar plant will also help the tribe which has been badly abused in the past, being left with only a 1000 acre reservation. No, the plant is not on the reservation. See the local newspaper: Reid Helps Moapa Band Break Ground On Solar Project. Moapa Valley Progress. March 26, 2014. 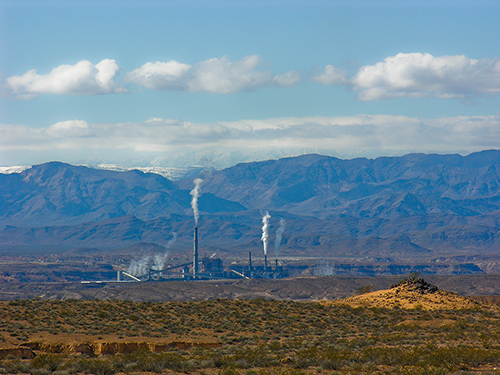 It is amazing that conspiracy theorist Alex Jones would actually publish a map showing the location of the project. Anyone with the least geographic information can see it is not on the land where Bundy has been stealing the public’s grass for a generation.

There is also a solar farm proposal near Laughlin, Nevada, at the very southern tip of the state.  Some of the right wing news outlets also confuses this with the trespass land near Mesquite. Here is an earlier story about the Laughlin project. The Chinese Try to Harness the Nevada Sun.   Regarding this plant, back on April 5, Bloomberg Businessweek tried to work a negative Chinese angle. Now it too has been morphed onto the public land where Bundy has no right to graze and where he has threatened violence if not allowed to continue his illegal activity.

The only thing that has been proposed for the public land where Bundy’s cows continue to trespass is some kind of protective classification like a scenic area, recreation area, national monument.

The right wing media is using the unfortunate public ignorance of Nevada geography to make the attack by the armed mob on the BLM into a political point against Senator Reid. Though it is doubtful Bundy knew what would happen, his cause has already been picked up by the Koch Brothers and others who really do want our public land — all of it. They want to transfer it to private ownership directly or through the states. Their Americans for Prosperity front group is trumpeting Bundy’s cause.  The animosity between Senator Reid and the Koch brothers is well known. The Kochs have already spent perhaps 50-million dollars in attack ads this year trying to win a Republican senate majority this fall. Some Republicans worry these energy and chemical barons are trying to build a parallel political party.

Together the two Kochs have 80-100-billion dollars to play with, probably the 5th and 6th richest men on the planet. They can now spend as much as they want on American elections, courtesy of the Supreme Court. They can, and probably will spend more in 2014 than was spent in the entire 2012 campaign. They could fund it many times over. Of course, so will other billionaires, but they will spend less. However, it is the Kochs and Harry Reid that have the argument. It would be nice to talk about Bundy instead.

A note to those who are new to commenting at The Wildlife News. We require a real, working email address. If you don’t have one, you can’t comment. Webmaster.