Gardiner- A weekend long event titled, Speak for Wolves: Yellowstone 2014 is scheduled to take place in Gardiner, Montana from June 27-29, 2014. Organizers are describing it as an opportunity for the American people to unite and demand wildlife management reform and take steps toward restoring our national heritage. The festivities include prominent speakers, live music, food/drink, children’s activities, a trapping/snaring demonstration, the viewing of wildlife documentaries and panel discussions. Cinema photographer Bob Landis will kick things off on Friday June 27 with the screening of his newest documentary about the life and death of the world-famous ’06 Alpha Female from Yellowstone’s Lamar Creek Pack.

Over 3,000 gray wolves have been slaughtered across the United States in the few years the species has been delisted from the Endangered Species Act. Hunting seasons are currently taking place in Idaho, Montana, Wyoming, Wisconsin, Michigan and Minnesota.

“The verdict is in and state fish and game agencies have proven that they are not capable of managing wolves or any other predator according to the best available science and the interests of the American people,” said Brett Haverstick, main organizer for the event. “It’s time to overhaul these crony state agencies or begin having a conversation about permanently transferring the management of predators to the federal government.”

Dubbed as a celebration of predators and the ecological niche they play across the landscape, the event’s platform revolves around five main principles to reform wildlife management in America. The removal of livestock from all federal public lands is one of them.

“It’s time to close the chapter on welfare ranching across federal public lands in the West,” said Haverstick. “The American people want wild landscapes, with native wildlife roaming freely as part of their national heritage, not cow pies, cheat-grass and trampled landscapes.

Recently, a report surfaced claiming that the USDA’s Wildlife Services killed approximately four million animals across the United States in 2013. Organizers support current efforts to investigate the agency and are calling for the predator control portion of the agency to be abolished.

“At the behest of the Idaho Fish & Game Department, Wildlife Services recently gunned down 23 gray wolves with taxpayer dollars from a helicopter in rugged north-central Idaho,” said Haverstick. “Congress needs to scrutinize this rogue agency and it begins with questioning the slaughter of wolves and other native wildlife in order to appease hunters, outfitters, and the livestock industry.”

In addition to speakers and authors from the conservation community addressing the broken wildlife management model in America, there will be a demonstration to educate the public about the brutality of trapping and snaring.

“The trapping and snaring practices of a small minority of Americans is currently responsible for the killing of hundreds of gray wolves in states like Idaho and Montana,” said Haverstick. “We want to see legislation introduced that would ban the use of all traps and snares on federal public land. The barbaric and indiscriminate killing of wolves and other native wildlife must stop.”

While organizers support the move to relist gray wolves under the federal Endangered Species Act, their goal is to see wildlife management in America completely overhauled.

“The gray wolf is a prime example of how wildlife management in America does not currently address the best available science and the changing demographics and values of Americans,” said Haverstick. “The ridiculous cycle of the federal government recovering a species, only to see state agencies practically eviscerate them from the landscape epitomizes the need for reform. The definition of insanity is doing the same thing over and over and expecting different results. Einstein said that.”

Speak for Wolves: Yellowstone 2014 is educational, inspirational and non-confrontational. To learn more about the event program, please visit http://www.speakforwolves.org/program/ 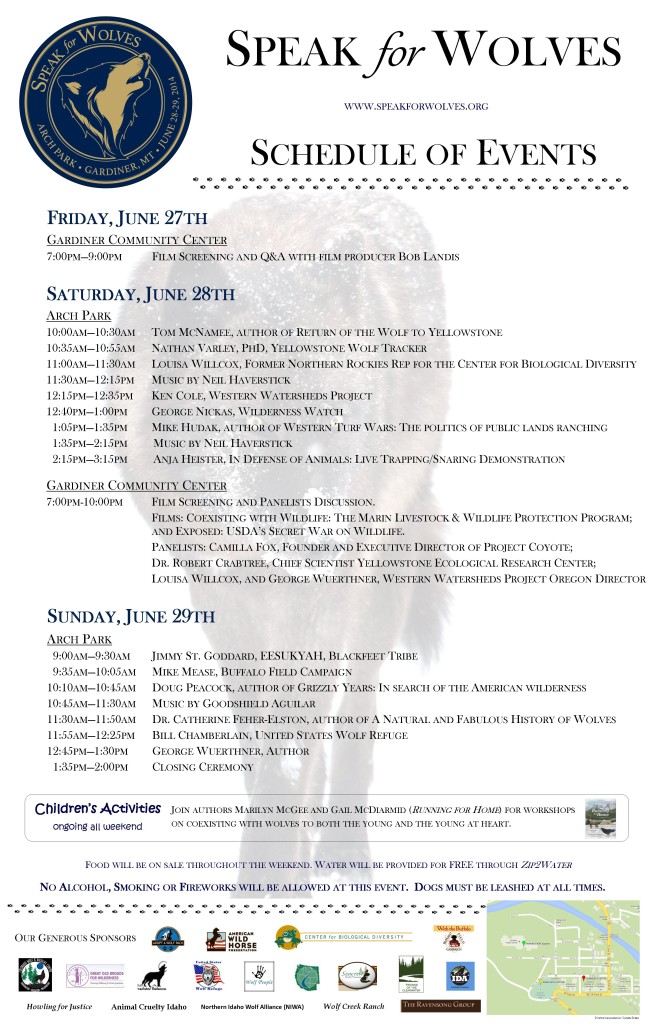