Could native pollinators save us?

Most folks are now aware that our honeybees are in big trouble. Public opinion surveys shows more total agreement about this environmental threat than global warming, likely because Republicans worry about the bees, but not climate change/global warming. Democrats and independents worry about both.

There is no consensus on the cause of honeybee decline, although it seems like more fingers are pointing to a fairly new kind of pesticide, the neonicotinoids. Yes, this refers to a new kind of nicotine-like pesticide. These first were introduced twenty years ago. More are being added. They seem to be sweeping the field, but like with DDT 40 years ago, voices are now rapidly rising about their side-effects. Europe is placing bans on them for some uses.

Neonicotinoids (neonics) are popular because they can be quite long lasting, can be used to coat seeds to produce insect-lethal plants as well as use in soil. They are not very toxic to birds and mammals, especially mammals. To quote from a pro-neonic web site: “the insecticide [inside the seed coat] is absorbed and distributed within the plant as it grows. This enables the plant to control pests that feed on it below or above ground. These threats to the plant can easily destroy the harvest, wasting huge amounts of natural resources (water, soil, nutrients), energy, and labour.”

In other words the plant kills insect pests from sprout through maturity. The pesticide will also enter into the pollen and nectar produced.

DDT and related pesticides (chlorinated hydrocarbons) have been off the market in most places for a long time now, and the recovery of many kinds of animals, especially birds at the top of the food chain, has been remarkable.  DDT was, of course, highly effective against many insects, but it didn’t seem to affect aquatic invertebrates, reptiles, mammals and birds, at least not directly. DDT was very persistent in the environment and it concentrated in the food chain, affecting animals at the top of the chain the most in the long run. In particular it altered calcium metabolism in birds. The eggs they laid were brittle and thin — not viable. This was a bitter pill for pesticide makers and some of the users. They fought hard, but eventually lost against the many efforts to ban it.

DDT and its cousins were replaced largely by the the organophosphate pesticides (OPs). These were not persistent in the environment and did not bioaccumulate in the food chain. Instead, they killed insects quickly. If not dead, they survived. OPs also sickened field workers quickly if they were allowed to enter the field too early.  It is hard to say if this was worse than the chlorinated hydrocarbons which did not make workers sick in the short run, but perhaps did twenty years later.

Neonics pummel insects too. It would be amazing if they only destroyed insect pests.  “Pest” is a not a biological classification; a general pesticide only for pests is not possible. Agricultural pests are a wide variety of things that humans find irritating or costly. Neonicotinoids harm most insects, including neutral and beneficial insects along with the pests. See “The effects of neonicotineoid insecticides on agriculturally important beneficial invertebrates.”  Neonics kill or weaken insects that prey on or are parasitic to other insects, thus disrupting biological controls, both intentional control and naturally occurring controls.

It might be safe to make individual plants invulnerable to insects, but that would kill the lady beetles and similar predators that crawl the leaves eating aphids. Pollen and plant nectars are problems. Bees, butterflies, and other harmless or beneficials that drink or eat these would succumb. Perhaps use on pollen rich plants could be banned, but it is not. Neonic seed coats are used on sunflowers!

Bees are beset with problems other than neonics. Colony disorder collpase has also been blamed on the growing incidence of the external parasitic varroa mite.  This tiny mite attaches itself to a bee, including bee eggs, and sucks out the hemolymph (the bee’s juices). 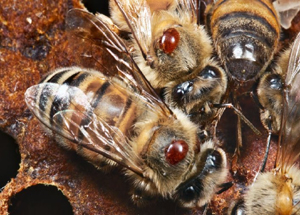 Varroa destructor is not a native bee parasite. The varroa greatly weakens a beehive and can be blamed for colony collapse. It might be an independent factor in the great decline of honeybees. It might also be that sub-acute exposure to neonics weaken the bees, setting them up for varroa attack.

I have a small piece of land I use for informal experiments of plants. I used to plant sunflowers and I noticed how many honeybees and bumblebees they attracted. Over time, before I heard the honeybees were in trouble, I perceived a decline in honeybees and I thought  more flying insects of some kinds flitting around the flowerheads.

Since I learned of neonics, I do not buy sunflower seeds. I let them volunteer from the previous year. The result of this is more pests, but the sunflowers bloom anyway. Amazing to me, is that there is a whole host of alternative bees and beelike flying insects moving through the pollen on the sunflowers.  They range from a large number of small, mostly black bees to large brightly stripped bees, but not as large as bumblebees.

Most people do not realize that what we call the honeybee is not native to the United States. There are many native bees. Some are solitary. Others live in small groups. Some swarm. To a degree European honeybees have been their competitors. What I am seeing is an influx of native bees. It is exciting to me.

I am not saying that the native bees are a panacea to the neonics, the mites, and perhaps diseases being spread. However, their habitats and habits are different. So too might be their susceptibility to these bee destroying agents. We should learn more about native bees and how to passive help, and not harm them. 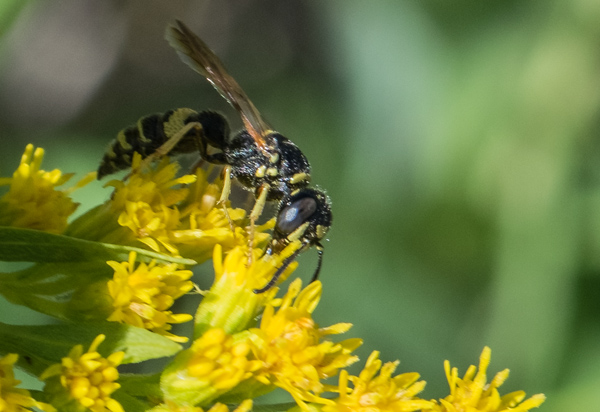