Reported missing on Sept. 7, the body of Adam Thomas Stewart has been found 3 miles north his camp in Cub Creek in the remote Teton Wilderness area, southeast of Yellowstone Park.  Stewart was found near two deer carcasses that the bear was probably eating. The condition of his body has not been reported. 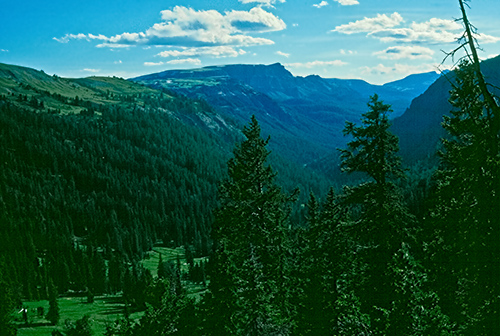 Wyoming Game and Fish Department has said that he probably died from a bear bite. The kind of bear was not identified, but most suspected is a grizzly. Reportedly DNA tests are being done on fur found on or near his body to determine the bear’s species. The area noted for its density of both grizzly and black bears. This writer saw a grizzly in Cub Creek back in the late 1970s when the big bears were at an all time low population in the Greater Yellowstone ecosystem.

Stewart, aged 31, worked for Nature’s Capital Ecological Assessment Services. They are located in Boise, Idaho. Reports have not made it clear what kind of research he was doing.

Judging from the description, Stewart was probably found on the roadless, trailess Cub Creek Plateau, a few miles from the Continental Divide. People superficially acquainted with Northwest Wyoming often confuse the Teton Wilderness with the Teton Mountains or Grand Teton National Park. However, the Wilderness is NE of the Park and covers a much larger tract of land, all of it roadless.

140 Responses to Bear kills researcher in the Teton Wilderness