The annual Frank Church Conference on Public Affairs this year, this weekend, will be in Boise, Idaho.  This year the conference is entitled Wilderness, America’s Heritage.”

Idaho’s senator, Frank Church,  sponsored the Wilderness Act, and in 1964  he was the floor manager of the bill as it passed the U.S. Senate.  In Idaho, his greatest achievement may have been the establishment of the River of No Return Wilderness area, the largest in the lower 48 states at 2.4-million acres. This is slightly larger than Yellowstone National Park. After the senator’s death, the wilderness was renamed the “Frank Church/River of No Return Wilderness,” or just “The Frank” to many.

According to the Frank Church Institute, “Church stated in a 1977 lecture, “The  wilderness movement was not a romantic excursion into the past; rather, it was the start of an exploration of our future…as we rise to the difficult challenge of designating and managing wilderness, we must rise, too, to the challenge of better stewardship of all our natural resources: the land, the water, and the air. As we proceed on this journey together, the real meaning of wilderness will open our eyes like an Idaho sunrise on a summer morning.” 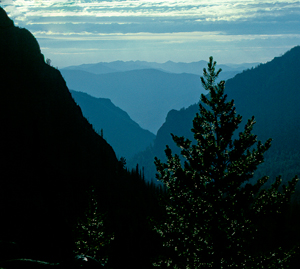 Down Cache Creek in the Frank Church Wilderness

The keynote speaker will be  historian Douglas Brinkley. Also attending will be Chief of the Forest Service, Tom Tidwell and former governor Cecil Andrus.  Andrus, who served 4 terms as Idaho governor, will be honored. He played a key role in the battle to secure the River of No Return Wilderness in the crucial 1979-80 time period.  At the time Andrus was Secretary of Interior.

In addition to the keynote speech. There will be three panels filling the day, Monday. The first is on the passage of the Central Idaho Wilderness Act of 1980, which established  the Frank. Panelists include former Democratic congressman from Idaho, Larry LaRocco who played a key role in establishment of the Gospel Hump Wilderness in Idaho. Also on on the panel will be Craig Gehrke, Idaho Regional Director of the  Wilderness Society; Rick Johnson, Executive Director, Idaho Conservation League who served on boards of the Campaign for America’s Wilderness; the American Wilderness Coalition; Advocates for the West; and the Wilderness Support Center; Dr. Ralph Maughan, former chair of the Sierra Club Northern Rockies Chapter; a founder and former president of the Greater Yellowstone Coalition; president of the Wolf Recovery Foundation; and Vice President of Western Watersheds Project. Maughan is also author of numerous books on backpacking.

The last panelist will be Doug Scott, wilderness advocate formerly with The Wilderness Society, Sierra Club and the Pew Charitable Trusts; author of The Enduring Wilderness: Protecting Our Natural Heritage through the Wilderness Act; and Wild Thoughts.

A book by Dr. Maughan  entitled Charles Manson was an Environmentalist, on the fight to protect what became the Frank, came out this month. It is available at Amazon.com.

The other two panels will feature discussions on the history of wilderness areas and the future of wilderness.

More on the conferences is in the Idaho Statesman at Garry V. Wenske: Celebration of Church’s landmark U.S. law will be special. Guest Opinion.

14 Responses to “Wilderness America’s Heritage” conference to be held Sunday, Monday in Boise