Acting Bridger-Teton National Forest supervisor Kathryn Conant is going to renew the special use permit for Wyoming Game and Fish Department’s Alkali Creek winter elk feedlot which is up the Gros Ventre River, sandwiched between the gravel road and the Gros Ventre Wilderness.

Two other elk feedgrounds are further downriver — Patrol Cabin and Fish Creek. Their permits were renewed several years ago. 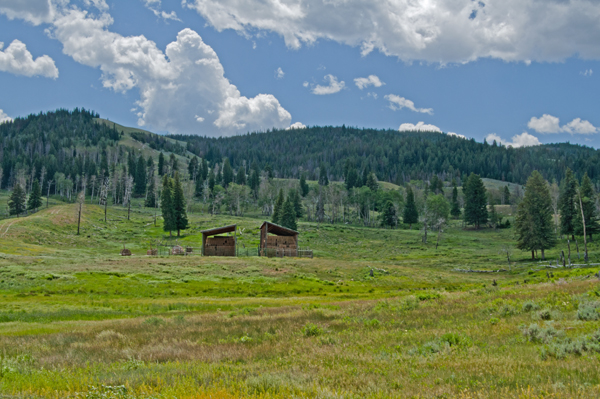 State run elk feeding is controversial. There is much of it in Wyoming, but most other Western states don’t do it, or do it less than Wyoming. It is controversial precisely because it spreads disease by concentrating the elk too close together. On the other hand, feeding keeps the elk off of private land, where cattle might graze or there might be homes. In Jackson Hole it is also a winter tourist attraction, but not so much up the Gros Ventre River east of Jackson Hole.

Hunting outfitters like winter feeding because they believe it holds up the elk population by preventing winter starvation. On the other hand, there is no doubt it facilitates disease. The worst is chronic wasting disease (CWD) which is clearly closing in on the Greater Yellowstone in Wyoming. CWD is an ultimate disease. Its infectious prions lie in the soil seemingly in permanence once the land is contaminated with them, waiting to infect again.

Elk have been fed in the general area for a century now. Predictions have been made that CWD will show up on the feedgrounds soon, and now it appears very soon. Acting supervisor Conant admits it, yet she approves the permit to keep Alkali Creek shoveling hay until doomsday.