The National Park Service (NPS) and the U.S. Fish and Wildlife Service (FWS) have just announced that they are jointly preparing a North Cascades Ecosystem Grizzly Bear Restoration Plan and Environmental Impact Statement (Plan/EIS). Public meetings are being held this coming March about the plan to restore grizzly bears to the rugged and vast North Cascade mountains of Washington State. Like Central Idaho, the North Cascades have been an official grizzly recovery area for many years now. Despite this status, both it and the Central Idaho (Bitterroot) grizzly recovery zone harbor from only a few, to no actual grizzly bears.

Meetings begin at the Red Barn in Winthrop, WA on March 3 at 5 p.m.  More will follow (see full schedule at bottom) in Okanogan, Wenatchee, Cle Elum, Seattle and Bellingham.  The views of the public will also be recorded on-line, comments accepted at http://parkplanning.nps.gov/NCEG through March 26, 2015.

The North Cascades ecosystem grizzly recovery zone is huge — 9,565 square miles (6-million+ acres) in the United States, plus 3,800 square miles to the north in British Columbia.  Public lands are 85% of it, 5% are Washington state lands. Ten per cent are private lands. 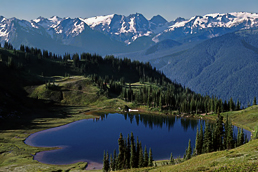 In the past there were many grizzly bears. During the days of the Hudson Bay Company (early to mid 1850s), 3788 grizzly bear hides were shipped out of the ecosystem area. The grizzly population was largely eliminated by activities like this in the 19th century, but sporadic grizzly sightings and killings have persisted throughout the 20th century until 2010. In recent years, there have been more observations in the Canadian part of the North Cascades than the American. The most recent was in October 2010. A hiker in North Cascades National Park took a beautiful photo of a grizzly in silhouette.

The North Cascades is one of the largest aggregations of generally wild, well-protected, scenic lands in America. There is North Cascades National Park, Ross Lake National Recreation Area and nine wilderness areas. Almost half the area is not accessible by road, and so offering maximum protection to grizzlies. The U.S. Fish and Wildlife Service has concluded that in the American part of the North Cascades there is habitat to support from 200 to 400 grizzly bears.

Here is detailed information on the meetings.

28 Responses to Grizzlies for the North Cascades? National Park Service wants to know