Boise, ID – In order to defend fisheries on the Salmon-Challis National Forest, Western Watersheds Project filed a lawsuit today against the U.S. Forest Service for its authorization of harmful livestock grazing in Idaho’s Copper Basin. Today’s suit challenges the Forest’s authorization of grazing between June and October within the headwaters and tributaries of the Big Lost River, a popular fly-fishing destination that is home to a variety of fish species including mountain whitefish and sculpin.
“Past and present grazing practices have caused substantial habitat degradation in the Big Lost River Basin,” said Travis Bruner, Executive Director of Western Watersheds Project. “Monitoring is supposed to help the fish by informing changes in management. On the Salmon-Challis, streams fail to meet proper temperature standards, have trampled banks, and don’t sustain the pools necessary to support fish. Nonetheless, the Forest continues to authorize livestock grazing, year after year, without making any effort to protect these habitats.” 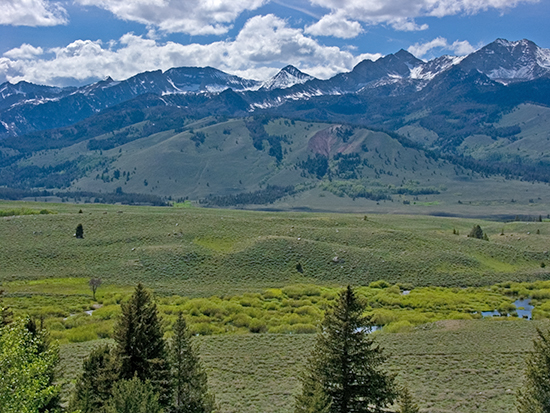 Copper Basin, Idaho. Copyright Ralph Maughan. This big mountain valley could be another wildlife full Lamar Valley like in Yellowstone.

Monitoring data from Copper Basin show degraded aquatic conditions and violations of use limits on vegetation. Furthermore, many of the allotments in the area have had cows grazing when they are not authorized and . Despite years of grazing abuse, the Forest Service has failed to take action against many of the permittees or enforce the few closures it has ordered and the stream conditions have continued to deteriorate.

“It shouldn’t take a lawsuit to get the Forest Service to follow the law, but WWP has been alerting the Forest Service to the problems of livestock grazing in Copper Basin for over a decade without result,” said Bruner. “Even with the documentation of grazing harms to these important habitats, the agency authorized business-as-usual for the summer of 2015. That’s not going to work to protect native fish.”
– – –

A copy of today’s complaint can be read here.

Photos of grazing impacts in Copper Basin’s riparian areas can be seen here.