Recovery of the Yellowstone grizzly bear has been an intense interest of mine for most of my adult life. Yellowstone Park has been a refuge, inspiration and cause for me since I was a boy in Rexburg, Idaho, and my parents began to take me there.

The grizzly bear was put on the threatened species list in 1975. At the time there was thought to be between 200 -300 grizzlies in the Greater Yellowstone Ecosystem, almost all of them inside Yellowstone National Park.

Despite the new protection from the Endangered Species Act, such as ending Wyoming’s grizzly bear hunt, the number of grizzlies kept going down. By the late 1970s, it was widely thought there were less than 200, perhaps fewer than 150.  Their extinction seemed more than a remote possibility in the Yellowstone.

Even though it is less than 20 miles south of Yellowstone, in the 70s and 80s there were no grizzlies Grand Teton National Park nor in the big valley at the feet of the Tetons, Jackson Hole.

About this time I began to explore on foot some wonderful deep wilderness country just to the south and southeast of Yellowstone Park. This was the Teton Wilderness. Don’t confuse it with the Teton mountain range or Grand Teton National Park. The Teton Wilderness embraces part of the volcanic pinnacles, castles, and high plateaus of the Absaroka mountains. The wilderness also includes the soft sedimentary Pinyon Peak Highlands that are the mountains on the northern end of Jackson Hole.

I soon found myself backpacking and writing a guide to that Wilderness — Beyond the Tetons: A Backpacking Guide to Wyoming’s Teton Wilderness.  This was an exciting project. One reason for the thrill of undertaking this adventure was that a few grizzlies were known to wander out of Yellowstone into this wilderness area. Some might actually live there.

In 1974, I had not yet seen a grizzly bear in the wild anywhere. Thinking that I might see, or run into one made me shiver with excitement and some fear. Such an event seemed imminent as I followed the faint, disused trails through the deep forest in the western half of the wilderness — places like Arizona Creek, Rodent Creek, Colter Creek, Wolverine Creek, Gravel Creek, Pilgrim Creek.

Hundreds of miles backpacking and four summers later I finished my research. I had seen no grizzlies, only some piles of fresh grizzly scat high up in Cub Creek in the Absaroka section of the wilderness. The Teton Wilderness was much the same as Yellowstone Park. What was the reason for the lack of grizzlies? In retrospect, I think those migrating south to the wilderness were shot. There is no hunting inside Yellowstone, but until the mid-70s there was a grizzly hunt south of Yellowstone, including the Teton Wilderness.

With passing time, I learned a lot more about grizzlies, and I saw some in the Greater Yellowstone backcountry. In 1978 while in the Black Canyon of the Yellowstone, I crested a rise in a meadow. Perhaps 50 feet on the other side was a sow and cubs digging in the soft soil of late May.  Fortunately, I was standing by a lone Douglas fir, one perfect for climbing. I did very quickly. In 1980 we ran into a big boar west of the Park while deep in the Madison Range. About five years later I saw a grizzly lifting and dropping downed logs (to break them open) across the Falls River from me just south of the Park in the Targhee National Forest.

Almost 20 years later (1995) a different publisher asked me to redo the Teton Wilderness guide and add to it the Washakie Wilderness just to its east. I agreed, but I wondered if I really would be able to backpack the trails in the two wildernesses totalling 1.3 million acres when I was 50 years old. With a most capable partner it turned out I could. I teamed up with Lee Mercer, a very experienced wilderness traveller. He was 15 years my junior. 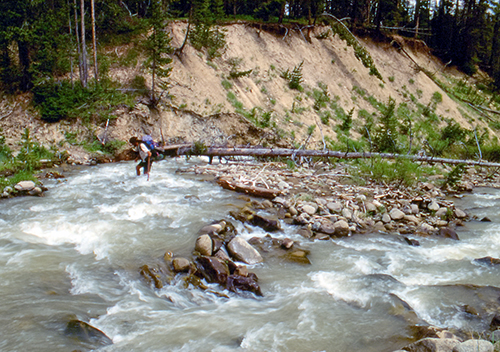 This time there was no shortage of grizzly bears. The Teton Wilderness was now much different — wilder to my viewpoint. The heavily forested western portion (Pinyon Peak highlands) had burned in the great fires of 1988. In addition, grizzlies had thoroughly reinhabitated the area. We even got a glimpse of the first wolf pack to call the Teton Wilderness home. There was grizzly sign in every drainage, and we saw them too, though all in the distance on the alpine plateaus. While camping in late spring snow, several times I found a grizzly had walked through camp during the night.

Population growth and the spread of grizzly bears (or is it dispersal to find better sources of food?)-

The official figures show the Greater Yellowstone grizzly population growing rapidly from about 1982 to 2002 –4% a year. By then many reforms had been implemented to protect grizzly bears. By many accounts the population peaked in 2002 at 750 bears and, while this is controversial, it has been plateaued at about 750 ever since. Bears do keep showing up in new areas and they have firmly established residence in places where few ever thought they would be seen again. This now includes Grand Teton National Park and most of Jackson Hole. There is a great contest going on over bears in highly suitable habitat of the Upper Green River at the northern end of the Wind River Mountains. They arrived about a decade ago. Every year many grizzlies are shot in the upper Green.. The bears eat a number of the cows brought in for the summer. There is a lot of forage for livestock in the Upper Green too. Of course, what the cows eat could have gone to deer, elk, pronghorn, and moose. 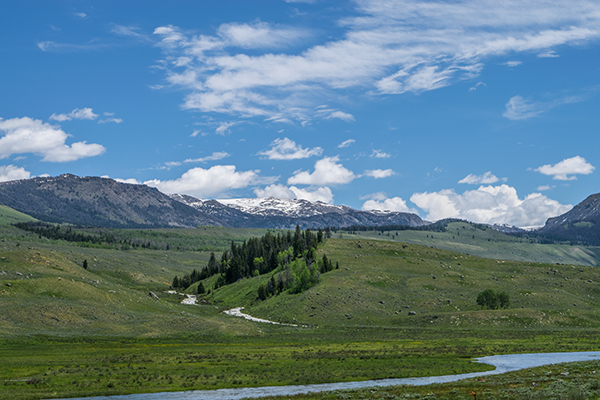 The upper Green River at the confluence of the Roaring Fork. Copyright Ralph Maughan

Many say the spread of the grizzlies is due to a now overly large grizzly population (although count stays at about 750). Many say that Yellowstone and its near environs are full, so the bears are seeking out new territory in all directions. However, the same pattern can be explained by a grizzly population thinning out as Yellowstone’s food sources decline inside the Park and in parts of the rest of the Greater Yellowstone.

Since about 1990 the cutthroat trout population has crashed in Yellowstone Lake and its tributary streams, and even more important the whitebark pine nut crop has greatly declined due to whitebark pine blister rust, the mountain pine beetle and high elevation wildfires. The elk population in the Park is also only about half of what it was 20 years ago. The decline has been offset in part by the bears learning about the army cutworm moth sites high in the Absarokas. Now almost every Yellowstone Park eastside bear visits these safe, remote agglomerations of torpid moths in the alpine rockslides.

While the bears seem ingenious in finding new food sources to replace part of the loss described, one obvious method is to abandon the country and seek food far afield from Yellowstone Park. So, the bear that is in the apple orchard at Ashton, Idaho, might be there because there was not enough food for it anymore in Yellowstone.

I am happy to see the great bear inhabiting more of its former range in NW Wyoming, Montana, and Eastern Idaho, although I don’t know the true reason for the reoccupation of these lands. It seems to me that there has been growing human tolerance of the bears. There isn’t crazy talk about them like with the wolf. Many in Idaho, Wyoming and Montana are proud to have them. They do not fear the bears. They respect them. Even people who have had a run-in with a grizzly usually do not say the bear should be killed. Instead they often say they accept the slight risk they took for hunting, fishing, recreating, or working in this fine country.  I like it when people show a little bravery and reject the propaganda of the extremists who have also crept in and inhabited grizzly country.

The U.S. government and the state governments have been saying the grizzly bear is no longer threatened. This has been their position for some time.  I disagree, but the success of any delisting  the grizzly depends on whether they accept the current population-geographic situation or whether they mean to role back to where grizzlies are allowed to live in just Yellowstone Park and its near boundaries. That would mean going from 750 bears to 200-300 again, maybe less. So what good was the effort and the sacrifice made by so many people for so long?

In recent days, some politicians in the state of Wyoming have been passing resolutions urging immediate delisting, and the federal government’s Daniel M. Ashe, Director of the U.S. Fish and Wildlife Service is talking about it again too. Ashe has been less than a friend of endangered species, a disappointment to most conservationists.

Agenda for the meeting.

36 Responses to Recovery of grizzly bears, a lifelong concern