Only 81 wolves in Oregon, but Fish and Wildlife Commission delists-

Today, Nov. 9, the Oregon Fish and Wildlife Commission delisted wolves from protection under the Oregon Endangered Species Act. It was a long meeting before the 4-2 vote to agree with the recommendation of the selected wildlife biologists that the wolf population had met the five criteria for delisting.

The biggest factor was that the population had cleared a very low bar — at least 4 breeding wolf pairs for three years in a row. All of the breeding pairs are in NE Oregon near where wolves first entered the state from Idaho. Although there are now one or two wolf packs in the Cascade Mountains of western Oregon, the wolf distribution in the state has a very strong geographic skew. 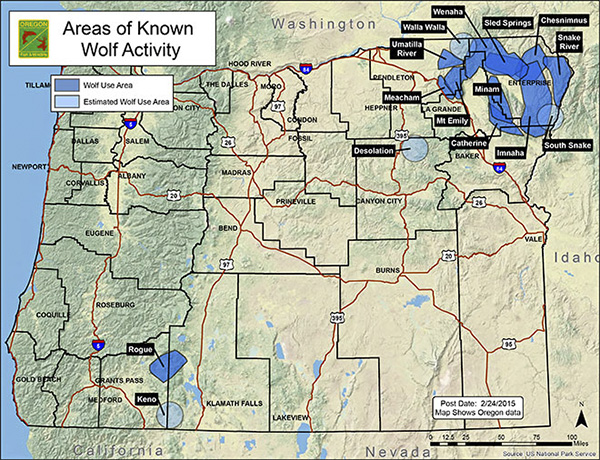 Oregon’s small wolf population lacks the genetic diversity of the restored wolf population in Idaho, Montana, and Wyoming. The wolves of these states came from multiple locations in Alberta, British Columbia and Montana (prior to the reintroduction of 1995-6). The Oregon wolves are based on a handful of migrants from Idaho alone.

The wolf population in Oregon retains strong protection according to the Commission. It will not yet become a game population for hunting and the fine for an illegal kill is $6,250 and a year in jail (maximum). The commission today directed staff to suggest an increased fine. It is not clear if there will be any management changes for the delisted population. When there are 7 breeding pairs, changes will be made.

Oregon’s wolf population, despite meeting the delisting criteria, has grown slowly compared to the wolf increase in Idaho once they were reintroduced there. Like most other western states, a great deal of wolf habitat exists in Oregon. Tad Larsen and William J. Ripple at Oregon State University determined there was 68,500 km2 of potential wolf habitat in Oregon that could support a population of approximately 1450 wolves.

The Commission pondered a partial delisting because of the skewed wolf population, but the state law was thought not to permit it.

About 200 people jammed into the hearing room with the wolf conservation groups on one side and the eastern Oregon livestock and related interests on the other. The former said, “This outcome for Oregon’s small wolf population seemed at times to be predetermined.” They pointed out that the delisting has not been considered by independent wolf biologists. The later group said that pro-wolf groups were going back on the delisting agreement they had signed years earlier.

94 Responses to Oregon Commission delists wolves in the state