Rarely given more than minimal herding, Bundy’s cattle seem now to be on their own-

Many people argue that Nevada, the driest state, is really no place for cattle, grass-loving creatures that they are. Nonetheless, herds of widely spaced cattle have pummeled the landscape there for over a hundred years.

For a generation Cliven Bundy ran his herd illegally on and around the former Bunkerville grazing allotment in the hot desert near Las Vegas (more properly next to Mesquite, Nevada). It was public land at first, but then increasing numbers of his cattle became at least semi-feral and were found over a huge area near the Nevada, Utah, Arizona border. Bundy portrayed himself as a typical rancher, opposed by the government, but the U.S. Attorney at the time of his indictment told the judge:

“Raised in the wild, Bundy’s cattle are left to fend for themselves year-round, fighting off predators and scrounging for the meager amounts of food and water available in the difficult and arid terrain that comprises the public lands in that area of the country,”. . . . “Bereft of human interaction, his cattle that manage to survive are wild, mean and ornery.

“He does not vaccinate or treat his cattle for disease; does not employ cowboys to control and herd them; does not manage or control breeding; has no knowledge of where all the cattle are located at any given time; rarely brands them before he captures them; and has to bait them into traps in order to gather them.

Now there seems to be no care for the cattle at all, and it is reported that they are slowly starving, although there is no official confirmation of this. March through May is the only time of the year when there is any semblance of what looks like grass or forbs on the big alluvial fans beneath the Virgin mountain range where the cattle roam. The Reno Gazette-Journal contacted State of Nevada officials about finally rounding up the cattle, but they were told by email from Flint Wright from the Nevada Department of Agriculture:

“We have not received any substantiated reports of Cliven Bundy’s cattle starving on the Golden Butte [sic] allotment — though this may be true to some extent, as Cliven’s management practices leave a lot to be desired.

“Yes the cattle are in trespass and some are unbranded, and therefore feral and estray. Also yes, per [Nevada Revised Statute] 569, that makes them state property. However, because they are trespassed on BLM ground with a court order in effect, it would require BLM or the court to authorize the [Nevada Department of Agriculture] to perform any sort of gather of the cattle.”

Wright said the herd’s size was unknown, but it was probably 1000 or more. A report from the BLM in 2014 said Bundy’s cattle had been found over an incredible 700 square mile area that included BLM, National Park (Lake Mead NRA), state and private lands (in addition to Bundy’s private land). 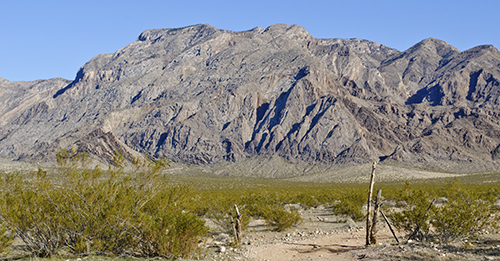 Beneath the Virgin Mtns. in March. Nothing to eat but creosote. Photo by Ralph Maughan

It is hard to say when they will be removed because in the past outfits contracted to round up the cattle have been threatened and run off by Bundy supporters. In addition the cattle are near feral and often mean:

Nevada Fish and Wildlife Department told E&E News that the physical effort of rounding up the cattle would be most hard.  “But removing Bundy’s ornery, battle-tested herd — estimated by one Nevada official to be worth up to $800,000 — will be expensive, logistically difficult and potentially dangerous.  ‘It’s like hunting cape buffalo,’ said Ken Mayer, the former director of Nevada’s Department of Wildlife. ‘They’re nasty, they’re smart, and they won’t hesitate to charge.’ ” Of course, the value of the herd will also decline as they stand in the waterless 100° + F. heat of the southern Nevada summer.