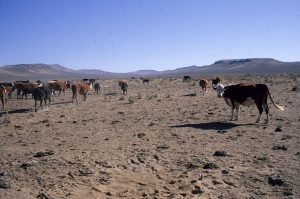 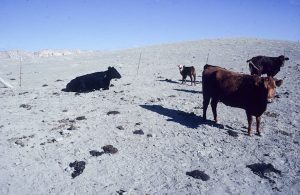 The Bureau of Land Management (BLM) is rewriting its grazing regulations to allow more “flexibility” into range management. The agency even proposes increases in grazing seasons and numbers. All of this, of course, is the result of the pressure from the fox (Trump administration) guarding the hen house.

I think most career BLM employees know these changes will only lead to further degradation of our rangelands. Unfortunately, if you are a BLM employee, you must keep your head down, or you will be out of a job.

One of the excuses used to expand grazing is to reduce wildfires. While grazing grasses might appear to make sense as a fuel reduction effort to those who are unfamiliar with fire ecology, the reality is more nuanced.

Except in the early spring, cheatgrass is not a preferred forage. As a result, livestock preferentially graze native perennial grasses and reduce their overall vigor, either directly eliminating them from the site, or decreasing their ability to compete against cheatgrass for nutrients and water.

Native plants weakened by a blaze are particularly vulnerable to cheatgrass competition. This is why permitting cattle to graze burned sites a few years after a blaze (as commonly is practiced on BLM and FS allotments) is counterproductive, and only enhances cheatgrass spread.

Another study looked at wildfire, cheatgrass, and livestock grazing. The scientists concluded that “Increased site resistance (to cheatgrass invasion) following fire was associated with higher bunch grass cover and recovery of bunchgrasses and mosses with time since fire. Evidence of grazing was more pronounced on burned sites and was positively correlated with the cover of B. tectorum, indicating an interaction between fire and grazing that decreases site resistance.”

A third paper just published this winter found that “biocrusts increase site resistance to invasion (by cheatgrass) at a landscape scale and mediate the effects of disturbance. Biocrust species richness, which is reduced by livestock grazing, also appears to promote native perennial grasses.”

Beyond the fact that livestock grazing promotes the spread of cheatgrass, a further issue is that “fuel reduction” by grazing has complicating factors.

In a widely cited paper by U of Arizona researchers who looked at targeted grazing as a fire reduction measure, and concluded that their results only worked under “moderate” fire weather conditions. Under moderate fire weather conditions, it’s relatively easy to stop or suppress a wildfire, so any advantages gained in fire suppression are marginal. Grazing won’t prevent the large fires that burn tens or even hundreds of thousands of acres.

The BLM, nor livestock promoters readily admit these problems of cheatgrass, wildfire, and livestock grazing. The fact remains the proposed regulation changes will make it more difficult to hold accountable the BLM and the livestock industry who are directly culpable for the on-going degradation of our public lands.