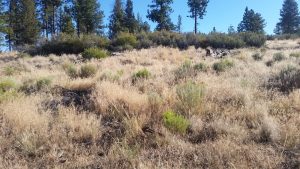 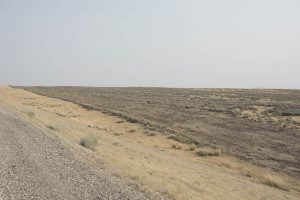 The Department of Interior released a final decision to created 11,000 miles of linear cheatgrass corridors, which they are euphemistically calling “fuel breaks.” Think about that figure. Eleven thousand miles is equal to crossing the United States almost three times! The goal is to reduce wildfires across the sagebrush ecosystem of the Great Basin in Nevada, Oregon, Utah, Idaho, and California.

There is no doubt that wildfire is a threat to the continued existence of sagebrush habitat across the Great Basin. Still, the creation of a massive system of “fuel breaks” is unlikely to alter wildfire behavior and spread. Indeed, there is considerable agreement in the scientific community that such habitat disturbance resulting from “fuel breaks” will enhance fire spread, not slow or halt it.

The proposal calls for bulldozing, mowing, use of herbicide, and livestock grazing to reduce “fuels.” Yet there is an overwhelming conclusion in the scientific community that such disturbance, especially that resulting from livestock grazing, enhances the spread of cheatgrass.

Cheatgrass is a highly flammable exotic annual grass. It thrives in areas where native vegetation has been degraded and the soil biocrusts destroyed. Biocrusts are lichens, mosses, and cyanobacteria that shields the soil in between native grasses with a protective coating that resists cheatgrass establishment.

A third paper in Ecosystems found that grazing “was positively correlated with the cover of B. tectorum (cheatgrass).”

A Department of Interior report suggests that an extensive system of fuel breaks would “create edges and edge effects, serve as vectors for wildlife movement and plant invasions (like cheatgrass), and fragment otherwise contiguous sagebrush landscapes.”

Beyond the creation of linear cheatgrass highways, the proposal assumes that “fuel breaks” work to slow wildfire. While fuel reduction might work under low to moderate fire weather conditions, such measures do not work under “extreme fire weather” conditions.

The overwhelming evidence is that all large wildfires are wind-driven events. During such conditions, sparks and embers are blown as much as several miles ahead of the flame front, making a mockery of the idea that a 300-foot-wide corridor can effectively halt fire spread.

Keep in mind that wildfires regularly jump 12 lane interstates and even entire rivers where there is no fuel at all.  So how are “fuel breaks” covered with a highly flammable grass-like cheatgrass going to stop a wind-driven blaze?

A Dept of Interior report on fuel breaks admits as much concluding that “fire managers acknowledge that, under extreme fire weather conditions, fuel breaks are unlikely to adequately reduce fireline intensity, flame length, or rate of spread.”

In a recent paper on fuel breaks with the title: “The ecological uncertainty of wildfire fuel breaks: examples from the sagebrush steppe,” the authors warn that fuel breaks are of unproven effectiveness in the face of extreme fire weather.

Furthermore, the BLM has admitted as much in a recent report where it concluded; “Despite the extensive use of fuel breaks in sagebrush landscapes, especially since the 1990s, the IRFMS-ASP points out that “no specific research within the sagebrush ecosystem has been conducted to evaluate their effectiveness.”

I could cite many other papers concluding the same basic idea. Disturbance from livestock grazing and other management proposals like bulldozing enhances the spread of cheatgrass. Cheatgrass is one of the factors contributing to massive wildfires. Furthermore, under extreme fire weather conditions, fuel breaks do not work. The reason this is qualifier is critical is that the very fires that the BLM is trying to halt are the ones that occur during these extreme weather events.

If the BLM were serious about reducing wildfires across the sagebrush landscape, it would remove one of the most significant factors contributing to cheatgrass spread and thus wildfires—namely livestock production. Want to save the sagebrush ecosystem? Send the cows home.