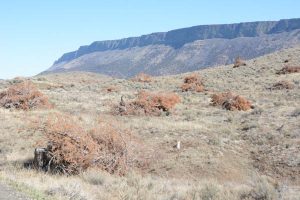 The project area covers nearly 223 million acres and includes portions of California, Idaho, Nevada, Oregon, Utah, and Washington. The project’s purpose is to enhance the long-term function, viability, resistance, and resilience of sagebrush communities in the project area.

The problem is that its preferred alternative B, which covers a 38 million-acre subunit will likely hasten the destruction of sagebrush ecosystems while providing few of the presumed benefits such as a reduction in wildfires or restoration of the ecosystem.

The way to save the sagebrush steppe is to eliminate all unnatural disturbance. Disturbance enhances the growth of non-native exotic species like cheatgrass, a highly flammable annual.

Like nearly all BLM proposals and environmental reviews, the contribution of livestock grazing, one of the major factors leading to ecosystem degradation is ignored or glossed over.

The numerous impacts on ecosystem values resulting from livestock production include compaction of soils, trampling of riparian areas, pollution of water, spreading of weeds, forage competition with native herbivores from grasshoppers to elk, the transmission of disease from domestic animals to wildlife (like domestic sheep to bighorn sheep), alternation of fire regimes, the fragmentation of native vegetation by fences, roads, and other livestock infrastructure, killing of pests (prairie dogs) and predators (coyotes, wolves, and bears), and the annual subsidy of private livestock use of public lands by taxpayers, there’s not much reason to examine the impacts of livestock production on public lands, or that is what you would think from the way the BLM assiduously ignores livestock production and its effects on public resources.

One of the unspoken factors contributing to the decline of the sagebrush steppe is the loss of native herbivores including grasshoppers, ground squirrels, and jackrabbits. If they become abundant, the BLM poisons them. All these species “consume” biomass, reducing the buildup of fuels, plus they provide “food” for other native species like golden eagles or coyotes.

Furthermore, the BLM in the name of “restoration” is doing massive plantings of exotic grasses like crested wheatgrass. Crested wheatgrass, because it is from Asia, has few native insects or fungi that eat it. And it is not palatable to most native wildlife. So it supports far less biodiversity than native grass species.

None of these factors are ever considered by the BLM range conservationists. Instead “restoration” is about more manipulation of the sagebrush ecosystem to benefit livestock production.

The “restoration” proposed in this PEIS includes a massive assault on native juniper trees. Pinyon-Juniper woodlands are among the most biologically diverse habitats in the arid West. Indeed, more than 70 species of birds are known to breed in pinyon-juniper woodland. Some are obligate breeders in these habitats.[1]

The logic for juniper removal goes like this. Juniper is imbedded in sagebrush. Since sagebrush “had to burn” frequently, it would have killed juniper, precluding the “unnatural” juniper “invasion.” Therefore, the presence of juniper, except on rocky ridges where fire is precluded by limited fuel, is considered “unnatural.”

Yet this assumption is based on the idea that sagebrush ecosystems frequently burned—every 20-30 years.

Part of the logic for this frequent fire in sagebrush ecosystems is due to the myth of Indian burning. Advocates of Indian “management” of the landscape suggest that Indians set fires to make travel easier, create habitat for specific plants and animals. While Indian burning did influence localized plant communities, the scientific evidence for frequent burning as a significant landscape influence is largely absent.[2]

If burning intervals were so frequent as suggested by the BLM, we would have little sagebrush as it often takes decades to hundreds of years for sagebrush killed by wildfire to recover fully. [3]

An example of this misinterpretation of fire in sagebrush ecosystems and its presumed influence on juniper is found in Biology, Ecology, and Management of Western Juniper(Juniperus occidentalis) which states that “productive mountain big sagebrush plant associations in the Northwest, such as those characterized by Idaho fescue (Festuca idahoensis), MFRIs (mean fire return intervals) typically ranged between 10 to 25 years (Table 3) and large fires every 38 years.”[4]

Dr. Roger Rosentreter, a sagebrush expert, recently retired from the Idaho BLM, agrees that most sagebrush species are characterized by long fire rotation. He says there are few sagebrush species in Great Basin that have developed adaptations to wildfire. If a fire comes through an area, it kills the sagebrush. The long interval between fires confirms the more recent interpretation that wildfire was rare in sagebrush ecosystems.

Part of the “restoration” promoted by the BLM is the removal of juniper across much of the Great Basin using brutal methods like clearcutting, bulldozing, chaining, and fire to kill the tree. The BLM argues that juniper “invasion” is unnatural and primarily the result of fire suppression, which it claims has allowed juniper to expand across millions of acres of the Great Basin. The BLM uses the short fire intervals to argue that frequent fires would have severely limited juniper.

Research by Baker and Shinnerman concludes that the usual method to determine fire history through fire scars is unreliable in juniper woodlands. They also suggest that rather than low severity blazes that do not kill older trees, their study found “all observed fires since EuroAmerican settlement in these woodlands were high-severity fires. In only two studies, there is sufficient information to allow a conclusion about whether high-severity fires have or have not increased since settlement. In these cases, the authors conclude they have not… the fire rotation for high-severity fires is estimated in only two studies, 400 years in one case, 480 years in the other. “[7]

Another study of juniper woodlands at Glen Canyon National Recreation Area determined “that it would take 400-600 years to burn a cumulative area equal in extent to Navajo Point.”

Despite a long history of livestock grazing and fire suppression policies, the woodlands on Navajo Point still retain most of their primeval character. Specifically, the landscape patch mosaic on Navajo Point has not been fundamentally altered by 20th-century fire exclusion.”[8]

Much of the so-called “invasion” of juniper woodlands may be recolonization after high severity fires hundreds of years before. We know from paleoclimatic studies that vegetation expands and declines as a result of the interaction of climate, fires, and seed availability.

For instance, juniper is a recent “immigrant” into the northern Great Basin.  Juniper and single-leaf pinyon have colonized the City of Rocks on the Idaho-Utah border only 3800 and 2800 cal yr BP, respectively. And pinyon pine did not expand broadly until ~ 700 cal yr BP. Then it takes a while for infilling occurring ~ 850–700 and 550–400 cal yr BP.(16)

Also, juniper is not expanding everywhere. Arendt and Baker documented a decline in pinyon-juniper woodlands in the Northern Colorado Plateau during the last century, which they attribute to increased fires due to cheatgrass.[9]

However, one of the unfortunate consequences of these massive disturbances advocated by the BLM is the invasion of cheatgrass. Cheatgrass thrives where disruption, whether from bulldozers or cows, disturbs the biocrusts that cover desert soils in between grasses. For example, Condon and Pyke concluded: “Independent of fire, grazing impacts resulted in reduced site resistance to B. tectorum, suggesting that grazing management that enhances plant and biocrust communities will also enhance site resistance.”[10]

Another 2019 study links the relationship between livestock grazing and cheatgrass invasion. “We present some of the first evidence that biocrusts increase site resistance to invasion at a landscape scale and mediate the effects of disturbance. Biocrust species richness, which is reduced by livestock grazing, also appears to promote native perennial grasses.” [11]

A recent review of the scientific literature on juniper and fuel treatments found: “recent studies suggest that climate has a greater influence on fire activity than fine fuels and biomass. Other researchers found that the surface disturbances associated with mechanical treatments may facilitate cheatgrass (Bromus tectorum) expansion and lead to increased fires. At present, there is little research supporting the contention that removing pinyon and juniper reduces incidence of fire.”[12]

The primary justification for this massive vegetation removal is the creation of fuel breaks, which the BLM asserts will reduce the spread of large fires. There is no doubt that the spread of cheatgrass has increased fire spread and severity. A BLM Technical Review concludes: “recent observations suggest many megafires are linked to cheatgrass-dominated areas which serve as primary ignition points and facilitate spread within large, contiguous stands of sagebrush (Baker 2011, Balch et al. 2013)”.[13]

The same technical report goes on to note that “Fuel breaks should not be expected to stop every fire even when combined with suppression resources. Syphard et al. (2011a, b) found only 22% to 47% of fires were stopped at fuel breaks even when firefighters could access them in forested systems, which emphasizes the importance of setting realistic expectations for effectiveness and ensuring fuel breaks are designed to be appropriate for the anticipated fire behavior.” [14]

In other words, fuel breaks typically tend to work during extreme fire weather only if supplemented with firefighters and additional suppression.

There is little empirical evidence that fuel breaks work, yet the BLM is proposing to modify millions of acres of the Great Basin. Shinneman et al. confirm, “Despite the extensive use of fuel breaks in sagebrush landscapes, especially since the 1990s, the IRFMS-ASP points out that “no specific research within the sagebrush ecosystem has been conducted to evaluate their effectiveness. Moreover, fire managers acknowledge that, under extreme fire weather conditions, fuel breaks are unlikely to adequately reduce fireline intensity, flame length, or rate of spread (Moriarty and others, 2016).”

The PEIS claims it will make it easier for the BLM to “reduce fuels and conserve and restore sagebrush communities in the Great Basin,” in reality, it will allow the BLM to approve harmful vegetation manipulation and removal projects across the Great Basin and Colorado Plateau with little public review and oversight.

It is a violation of NEPA to allow large-scale surface-disturbance of any kind on BLM lands without site-specific analysis, public accountability, and public input.

The proposed PEIS completely ignores any science showing that mechanical vegetation removal is overall very harmful to woodland-dependent species, including many birds whose populations are already in drastic decline.

The BLM should produce site-specific EIS for any vegetation manipulation, which should include an accurate examination of the disturbance that leads to cheatgrass spread resulting from livestock production,  fuel reduction or sage grouse habitat “improvements” fuel breaks, juniper control and other activities done in the name of “ecosystem health” or fire.

The BLM is considering comments until June 2, 2020. If you would like to send in comments, BLM_PEIS_Comments@blm.gov or https://www.virtualpublicmeeting.com/frrr-peis-8-providing-comments

[6] Fire Patterns in the Range of the Greater Sage-Grouse, 1984–2013—Implications for Conservation and Management Open-File Report 2015–1167

[10] Fire and Grazing Influence Site Resistance to Bromus tectorum Through Their Effects on Shrub, Bunchgrass and Biocrust Communities in the Great Basin (USA)