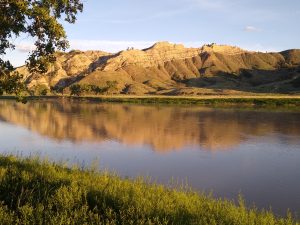 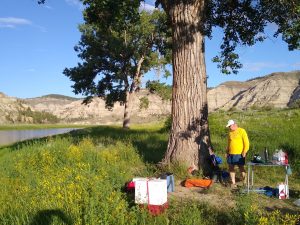 One hundred forty-nine miles of the Missouri River in Montana is a designated Wild and Scenic River. It is also within the 375,000 acres Missouri River Breaks National Monument, which includes the Lewis and Clark and Nez Perce National Historic Trails. It is part of the Bureau of Land Management’s (BLM) Landscape Conservation System. The Monument also includes six wilderness study areas, the Cow Creek Area of Critical Environmental Concern, the Fort Benton National Historic Landmark, a watchable wildlife area, and Missouri Breaks Back Country Byway.

One would naturally conclude that with all these national designations and recognitions that the Missouri Breaks would be an example of enlightened management. Unfortunately, nothing is further from the truth.

I recall having a conversation years ago with former Secretary of Interior Bruce Babbitt in Washington DC over his decision to create the National Landscape Conservation System under the BLM administration. In the past, some of the BLM’s most spectacular or critical wildlife lands have been transferred to the National Park Service in part because it was presumed that the BLM was too beholden to extractive interests to protect other values like biodiversity, wildlife, recreation, and scenery. For a good reason, critics derisively called it the Bureau of Livestock and Mining. As a former BLM employee, I can attest that the moniker was accurate.

Babbitt thought by keeping the management of the BLM’s “crown jewels” under agency control, he could force a shift in priorities.

I am sad to report that thus far, Babbitt’s goal of shifting BLM management priorities has not materialized—at least on the Missouri River Breaks. Instead, BLM malfeasance had allowed the livestock industry to continue to degrade and destroy our national heritage.

Back in the 1970s as an undergraduate student at the U of Montana, I floated the river with some of my professors to do a preliminary assessment on cottonwood regeneration along with the river’s riparian areas. ( Behan, M. 1981. The Missouri’s stately cottonwoods, how we can save them? Montana Magazine 76-77.)

I had not been back on the river since that time. Last week I had a chance to revisit the river to see how National Monument, historic trails, and Wild and Scenic River status had protected the river. I found conditions on the river are even worse than they were back in the 1970s.

What I saw on my most recent trip was the near elimination of any cottonwood regeneration. It was not for trying because there were thousands of cottonwood seedlings sprouting from the riverside mud, but in most cases, the young plants are consumed by domestic livestock during the summer months.

There was little cottonwood regeneration, but the understory of the “historic” trees that were established a hundred years ago or so was covered with smooth brome, an exotic grass, and several other non-native species crested wheatgrass and Kentucky bluegrass. One study in Manitoba found that the prevalence of exotic grasses impacted native birds due to the lack of native insects that are absent from sites dominated by non-native species.

There was little growth of native shrubs like red osier dogwood, chokecherry, serviceberry, and other shrubs that typically reside in the shade of the larger trees. The absence from the BLM lands is particularly noticeable when one enters the last 10 miles of the Wild and Scenic River segment within the Charles M. Russell National Wildlife Refuge and the James Kipp State Park. In both areas, the dense understory of shrubs, and even some young cottonwood regeneration is a stark contrast to the BLM managed areas.

Riparian areas are among the most critical habitats in the West. (Riparian areas are those thin green lines of vegetation influenced by water). By some estimates, riparian areas occupy less than 1% of the landscape but are used by 70-80% of all wildlife at some point in their life cycles. Among riparian species, cottonwood is recognized as a “keystone” species. Along the Missouri River, the cottonwood groves are tiny islands of woodland habitat full of migratory songbirds and used by bats, amphibians, and mammals.

Some livestock advocates have suggested that upstream dams have reduced the floods that are necessary for cottonwood establishment. However, a study of the river concluded that on average episodic floods of sufficient magnitude occur every nine years—which would be enough to maintain cottonwood groves. The seeds of a cottonwood do not compete well with established vegetation, thus require the micro-sites created by periodic floods.

Cattle are attracted to the riparian areas for water, shade, and green vegetation. In the process, they consume or trample young cottonwood and other vegetation.

The BLM recognizes that livestock grazing is among the most destructive uses of the river. As it does nearly everywhere, the BLM jumps through hoops trying to avoid reducing or eliminating livestock use. It should be noted that livestock grazing on public lands is a privilege. It can be eliminated at any time. Unfortunately, like most BLM lands, the few ranchers grazing the National Monument have a disproportionate influence on BLM management options. And despite the well-documented loss of cottonwood, the removal of cows is not an option the BLM is willing to pursue.

Periodically the BLM has tried other strategies to rejuvenate the cottonwood groves. Over the years, some BLM managers have authorized the fencing of some riparian areas to protect trees. Still, fences were not maintained, and livestock eventually entered these sites and consumed the trees. Indeed, in some instances, a change in BLM manager resulted in fenced exclosures being torn down. One presumes that this is because the resulting growth of riparian vegetation made the rest of the BLM management look bad.

In some of its designated campsites along the river, the agency and/or volunteer groups, have planted cottonwood and fenced the campground to preclude livestock grazing. In some instances, I did see some survival of trees. In other cases, the trees were dead or dying, primarily due to a lack of water. Ironically one site I visited the BLM had put in a solar-powered pump to get water to its tree saplings. But like many other projects on the river, the pump and solar panel were not working. In other sites, the BLM has put out buckets and asks the public to water trees.

Of course, the fencing and maintenance are never paid for by the ranchers whose cattle are the primary reason we need fencing or plantings of cottonwood.

I am told by a good friend who has floated the Missouri River numerous times that by August, it is nearly impossible to find a campsite without cattle dung everywhere. He carries a shovel so he can clear a spot for his tent.

It is not just the riparian areas that are in terrible ecological shape. Much of the uplands that I hiked were covered primarily with cheatgrass. This flammable exotic annual grass dominates where livestock grazing has compromised the native grasses and destroys the biocrusts that usually are found in the spaces between native bunchgrasses.

It is important to note that there are six wilderness study areas along this stretch of river. Recently the BLM completed a management review for these areas and made recommendations. All have cattle grazing, even though wilderness is supposed to preserve natural features and ecological processes.

For the most part, none of the “big green” groups have bothered to question the BLM’s management of our national heritage. There was an effort by Western Watershed Project and Montana residents Glenn Monahan and Nancy Schultz to force the BLM to address the cattle damage issue. They sued the BLM for its failure to protect the Monument’s values from livestock. https://casetext.com/case/w-watersheds-project-v-abbey, The judge ruled in favor of the agency.

Considering that it was forty years ago that I first paddled the Missouri River and the loss of cottonwood due to livestock grazing was evident even then, I am not hopeful that the BLM will ever manage the Monument for its ecological values.

Despite the well-documented damage that continues to degrade the Monument, the BLM has done little to limit cattle grazing. Ranchers continue their stranglehold on our national lands. The only viable solution I see is to admit that Bruce Babbitt’s idea that allowing the BLM to continue managing national treasures is a failure due to agency intransigence and the political power of the livestock lobby and other extractive industries.

The only way I can see for our national patrimony to be preserved is by transferring the Missouri Breaks National Monument to the National Park Service. Although the NPS occasionally sides with the livestock industry as well (see Point Reyes National Monument, for example), in general, it has a more preservationist tendency.