By Erik Molvar On December 4, 2020 · 35 Comments · In Western Watersheds Project 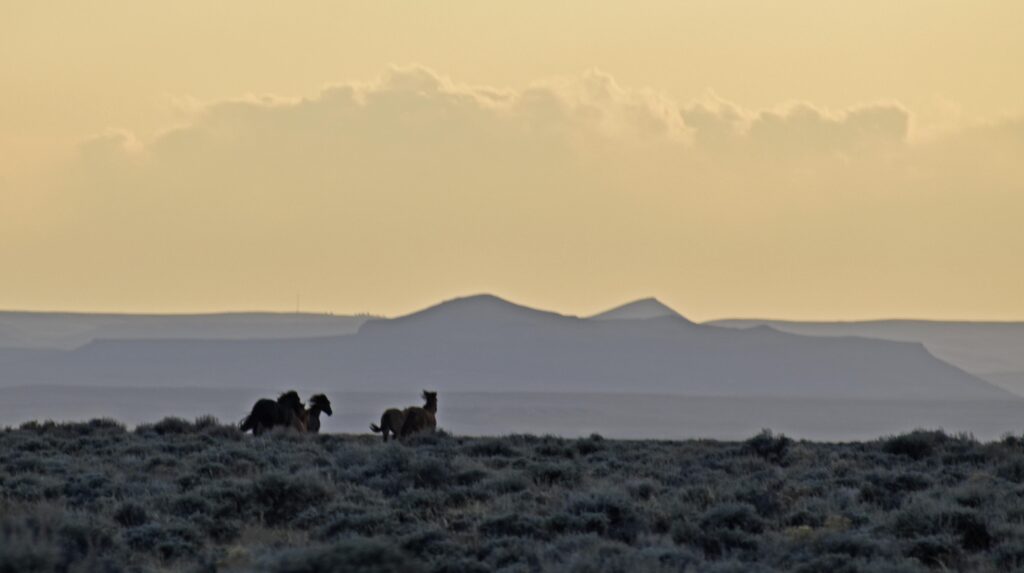 The livestock industry has cooked up a cock-and-bull story about how wild horses are the primary threat to land health in the West. The now-disgraced BLM interim director William Perry Pendley made that false assertion into official federal policy, but this self-serving fairy tale by the livestock lobby does not deserve to be taken seriously.

Wild horses are found primarily on Herd Management Areas (HMAs) spanning 26.9 million acres (11 percent) of the 245.7 million acres managed by the Bureau of Land Management, but are completely absent from the vast majority of western federal lands. Wild horses are often held at very low populations though aggressive federal roundups. Cattle and sheep, on the other hand, graze on the majority of western public lands, and hugely outnumber wild horses. Domestic livestock are officially authorized to cause major ecological destruction, grazing at densities known to be destructive to native vegetation and that encourage invasion by cheatgrass, the flammable weed that is fueling the unnaturally large and frequent wildfires in the West. Range management science states that limiting livestock forage removal in semi-arid areas to a maximum of 25 percent of the yearly grass production is appropriate, but the Bureau of Land Management and Forest Service regularly  authorize livestock use of  50 percent – or even more – of the grass each year, destroying rangeland health. That doesn’t even count the numerous cases of livestock trespass that happen every year – ranchers taking advantage by putting cattle on too early, leaving them out too late, or sneaking more cattle or sheep onto public lands than they are legally allowed.

Wild horse removals are just one more handout in a long line of taxpayer subsidies to the livestock industry. Ranchers pay only $1.35 a month to graze a cow-calf pair or five sheep on public lands. This is called the “Animal Unit Month,” or AUM, and wild horses also are weighted at one AUM apiece. Renting private lands in Mountain West states for the same livestock costs an average of $23.40 a month in the 16 western states, so the below-market federal rates amount to a massive taxpayer subsidy. Removing wild horses from public lands doesn’t help land health when it simply leads to more cheap grazing for the ranchers who rent federal allotments; instead, impacts stay the same (or even get worse) while cattlemen get more cheap grazing. The Bureau of Land Management openly admits this is happening. In its 2020 analysis proposing to zero out three wild horse Herd Management Areas in Wyoming’s Red Desert (and radically reduce horses in a fourth), the Bureau states that after horses are removed, “AUMs previously allocated to wild horse use may be allocated to wildlife, livestock or other ecosystem functions.”

After wild horses are removed from public lands, the males are castrated (called “gelding”), and they are warehoused in short-term holding facilities. The government then attempts to auction them for adoption by horse buyers, but many of them don’t get bids. Thousands are sent off to long-term holding pastures, which federal agencies rent from private operators (at taxpayer expense) for the princely sum of $60 an Animal Unit Month on average. It’s a very, very expensive program.

To sum up, federal agencies spend millions of taxpayer dollars on helicopter roundups to remove wild horses from lands where the grazing is valued at only $1.35 a month per animal, spends millions more on short-term holding and transportation, then houses them on private lands where the taxpayers get to pay an average of $60 a month per horse for the rest of their lives. The ranchers out west can then expand their public land herds at rock-bottom prices, while ranchers in the Midwest get paid premium prices to have the formerly wild horses graze their pastures. The livestock industry is taking advantage of the taxpayers for huge subsidies, coming and going, and is laughing all the way to the bank.

But the really sick part of all of this isn’t the obscene cost to the taxpayers or the livestock industry raking in financial windfalls. It’s the fact that the federal government is removing the horses that are ecologically well-adapted to dry conditions of the arid West and replacing them with cattle that are suited only to moist climates and are far more damaging to arid public lands. And to top it all off, they’re pasturing formerly wild horses on private lands in areas with abundant rainfall, pushing cattle off the very lands to which they’re ecologically suited. So in the end, the public gets more cattle on public lands, more ecological damage to public lands, wild horses shifted to private lands, less-sustainable beef production, and then gets to foot the bill for this whole package of expensive mismanagement to boot.

We have a land health crisis, and a cheatgrass pandemic, on our western public lands. It’s not because of wild horses, it’s because our federal agencies are enabling ecological degradation by failing to competently manage the livestock grazing on public lands. This problem isn’t getting solved by shuffling large herbivores around the continent. It’s long past time to manage wild horse numbers sustainably on the range instead (restoring natural predators and temporary birth control show promise), and to refocus federal attention and funding on the real problem – excessive domestic livestock and the cheatgrass invasions they cause – so we can restore healthy public lands, abundant wildlife, and clean-flowing streams and rivers throughout the West.

Erik Molvar is a wildlife biologist and serves as Executive Director for Western Watersheds Project, a nonprofit conservation organization dedicated to protecting and restoring wildlife and watersheds on western public lands.