Guest Post: BLM IS BROKEN AND HOW TO FIX IT Rewilding on a Global Scale: Addressing the Biodiversity Crisis 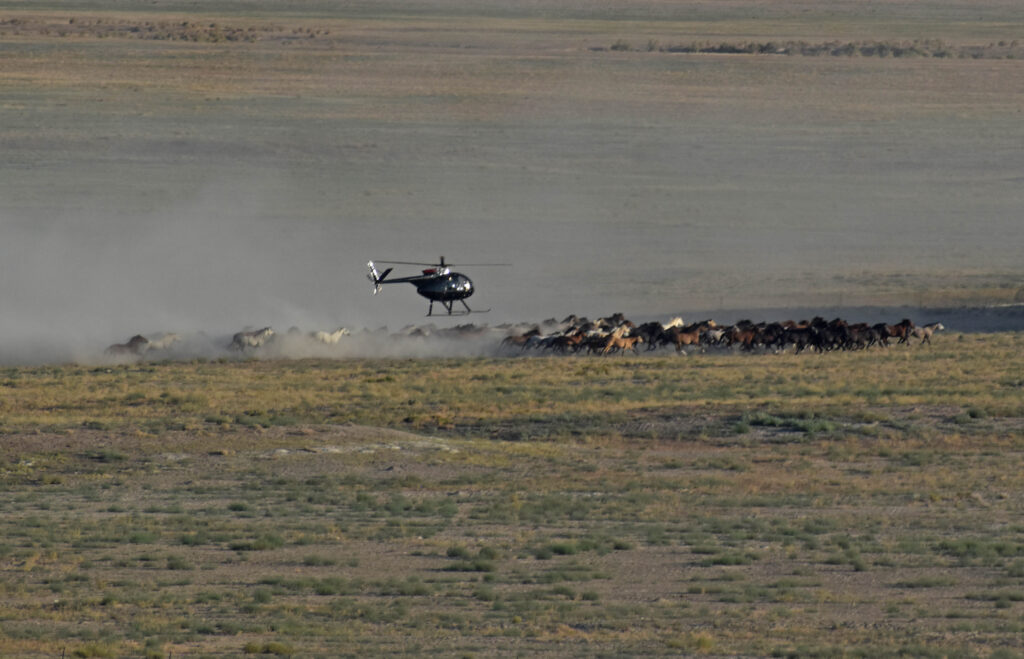 In July, the Bureau of Land Management rounded up the vast majority of Utah’s Onaqui wild horse herd. Pressed by a lawsuit, the Bureau’s Salt Lake Field Manager testified under oath that an emergency roundup was necessary because wild horses were in poor and declining health and would need to be euthanized if left in the wild. After removing the majority of the Onaqui herd from the federal lands, the agency admitted publicly that its narrative had been false: The captured Onaqui horses were in good body condition; there was plenty of forage on their Herd Management Area (HMA) to sustain the entire herd through the drought.

Under the Wild and Free-roaming Horses and Burros Act, the Bureau of Land Management is required to manage wild horse populations to maintain a “thriving natural ecological balance.” For each wild horse population, the agency sets Appropriate Management Levels (AMLs) to meet this goal, levels which the National Academy of Sciences has found have no basis in science. Instead, the agency sets AMLs arbitrarily, typically prioritizing the agency’s preference to have domestic cattle and sheep trucked into wild horse HMAs to compete with the horses.

At Onaqui, the Bureau claimed that wild horses were “overpopulated” with an agency-estimated 474 adults in Spring of 2021. According to Bureau’s formula, one wild horse grazing for one month is one Animal Unit Month (AUM), equivalent to one cow-calf pair or five domestic sheep grazing public lands for one month. The 474 Onaqui horses totaled 5,688 AUMs year-round. Meanwhile, the Bureau simultaneously authorized domestic livestock totaling 19,592 AUMs – the equivalent of 1,633 wild horses – on the Onaqui Mountain HMA. In other words, the Bureau authorized over three times as many livestock as there were horses on the range, but then claimed that it was the horses that were overpopulated.

In contrast, during the months before the roundup, field visits by WWP and others documented that poor range conditions on parts of the Onaqui Mountain Wild Horse Herd Management Area were caused by Bureau-authorized cattle and sheep overgrazing. Habitats far from water where wild horses grazed remained in good condition, and the horses themselves were healthy. To add insult to injury, the agency authorized cattle grazing on about 32,000 acres of the HMA fenced off for multiple years for post-fire recovery; this “grass bank,” unavailable to the wild horse herd, was turned over to livestock industry instead, even as the agency removed wild horses on the pretext of insufficient forage.

Trump appointee William Perry Pendley famously proclaimed wild horse “overpopulation” to be the agency’s number one problem. In reality, wild horse impacts are microscopic compared to impacts of Bureau-authorized cattle and sheep. The Pendley plan to eliminate wild horses, cynically named “The Path Forward,” and based on a collaborative process stacked with livestock industry advocates and apologists, calls for reducing wild horse numbers to 27,000 nationwide and sells out free-ranging horses. The overwhelming majority of Americans support environmental priorities like wilderness, national monuments, and endangered species protection, but collaborations like Pendley’s put powerful special interests in control of public lands management.

As the Bureau removes wild horses from public lands, the agency has increased the numbers of cattle and sheep authorized to graze in the same places. If maintaining a “thriving natural ecological balance” is a problem, trading wild horses for cattle isn’t going to help.

The Pendley wild horse plan is a scam on the American taxpayers to benefit the livestock industry. Public land ranchers are charged only $1.35 an AUM to graze public lands (compare that to $23.40/AUM charged on private ranchlands). So the taxpayers are paying the exorbitant cost of helicopter roundups to remove wild horses from range, and then to transport tens of thousands of them to long-term holding pastures, which costs the taxpayers $2 per horse per day (or $60/AUM). The whole scheme is projected to cost taxpayers $5 billion over 15 years.

By shipping wild horses to Midwestern states for long-term holding, this policy pushes cattle off fertile and moist private lands to which they are suited, all to boost cattle numbers on fragile lands in the arid West where they do the most damage.

On the final day of the Onaqui roundup, observers were told that the horses were actually in good condition, and forage was no longer a concern, but the roundup was justified due to a lack of sufficient water to sustain the horses in light of the drought. But drought wasn’t an issue when the Bureau first approved the emergency roundup. In any case, the cost of trucking water out to Onaqui horses over the summer would be far less than a helicopter-based roundup. If water is even needed – heavy rains hit Onaqui during the weeks following the roundup. The Bureau’s evolving excuses are simply one fiction after another. This roundup was completely unjustified, let alone an “emergency.”

Continuing the Trump administration’s wild horse policy at Onaqui is the first public misstep of environmental leadership by the nascent Biden administration. Instead of doubling down on Trump policies, the new administration needs to change course, and stop scapegoating wild horses for the ecological destruction caused by cattle and sheep. Honesty is the best policy.

** This version replaces an earlier – but substantively similar – draft of the article. (August 20, 2021)

Erik Molvar is a wildlife biologist and is Executive Director of Western Watersheds Project, a nonprofit conservation group dedicated to protecting and restoring wildlife and watersheds throughout the American West.