In an Aug. 29 letter to Agriculture Secretary Tom Vilsack and Interior Secretary Deb Haaland, lawmakers — mostly from California — said they’re worried the Forest Service remains short-staffed on wildfire crews. They urged officials not to let up on efforts to rapidly attack fires. These same politicians also support more logging of our forests to “reduce” fuels which they believe will stem fire spread.

It is not surprising that many politicians still latch on to the idea that more firefighters and logging could modify the increase in wildfires around the West. There is a universal tendency to use a bigger hammer to pound a nail if a smaller one is failing. But sometimes a bigger hammer isn’t the right solution. 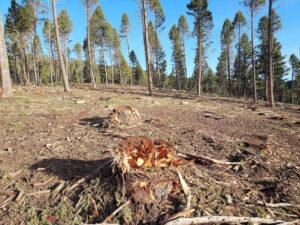 Yet over and over lawmakers and others continue to believe that they can control wildfires by “reducing” fuels through logging or prescribed burning and ramping up firefighting.

What they are ignoring are the factors that drive large wildfires. If you have extreme fire conditions of high temperatures, low humidity, severe drought and especially high winds, you cannot stop a blaze. Only 1-2% of all wildfires burn under these conditions, but they are the exact fires everyone is trying to control.

Instead of recognizing that a bigger hammer will not significantly influence wildfire behavior, we need to readjust our thinking and adopt a new paradigm. Maybe the old model of trying to control wildfires worked when climate warming was not a significant factor in wildfire ignitions and spread.

Given today’s climate realities, the old way of doing things is just like throwing dollar bills into the fire—it doesn’t stop the blazes and in many cases, actually increases the fire spread.

Prior to the Dixie Fire, California’s largest in 2021, this area had been thinned and behind the standing snags there is even a clearcut. None of which slowed the spread of the wind-driven Dixie Fire. Photo George Wuerthner

The idea that logging the forest in the backcountry is going to save homes is not supported by science. In fact, opening up the canopy logging can increase fire spread by drying fuels and creating more wind penetration.

Attempting to halt or slow a wildfire under extreme weather conditions is like trying to stop a Category Five hurricane. You can’t. All you can do is batten down the hatches and hope to survive the storm. 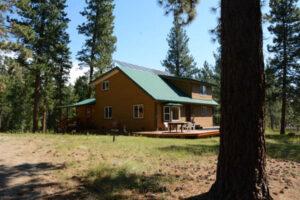 A house in Montana with a metal roof, and no vegetation immediately touching the house is more likely to survive a fire than a home without such home hardening. Photo George Wuerthner

Just because we cannot stop these extreme weather fires does not mean we must accept the loss of homes and people. Just as it’s possible to construct homes to survive a major hurricane, It is possible to site and harden homes, so they have a very good chance of surviving an extreme fire event.

For homes already built-in fire-vulnerable areas, home hardening offers a partial solution. If one modifies the home’s flammability, it will likely survive a major wildfire. Studies have shown that reducing fuels no more than 100 feet from a home can achieve remarkable results.

Modifying home construction materials is another way to reduce home losses. Home construction with steel instead of wood offers an alternative that is less likely to ignite.

The irony of the advocates of “log it” or lose it to a fire is that logging releases far more carbon into the atmosphere than a wildfire. Even the snags left after a high severity blaze store carbon for decades.

Unlogged forests store vast amounts of carbon as seen here in the Mount Shasta Wilderness. Our national forests should be set aside as carbon reserves. Photo  George Wuerthner

Rather than spending ever greater amounts of tax dollars subsidizing the logging of our forests, we should be preserving all public forests as carbon reserves. With the money saved by forgoing logging, we could assist homeowners in retrofitting homes to withstand the inevitable fires.

Finally, the United States as well as the rest of the world must get serious about reducing carbon to slow and perhaps even reverse climate warming; otherwise, no amount of money and resources will alter the present course of the planetary readjustment to growing drought and climate change.