Changes help livestock industry overall but does it change much on the ground for wildlife?

Last week it was announced that another herd of cattle had likely become infected with brucellosis. Six cattle from a herd in Park County, Montana tested positive for exposure and have been quarantined to await test results to confirm the infections. For years the threat of the consequences of a brucellosis infection of Montana’s livestock were held over the heads of bison and their advocates and used as justification for killing thousands of buffalo.  That’s still the case but things have changed significantly in the last year. 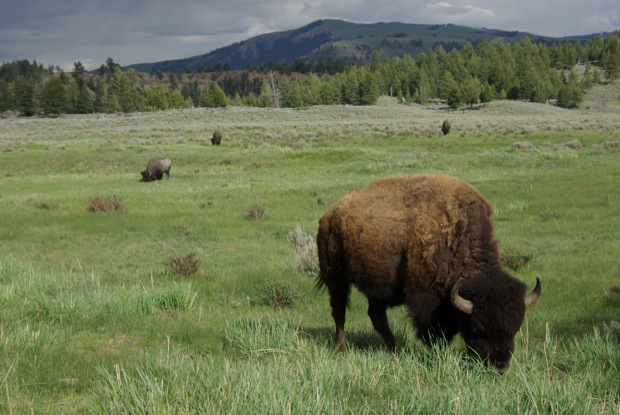 Now, the whole system has changed, at least in Montana, and parts of the state, primarily around the Greater Yellowstone area have been separated into “Designated Surveillance Areas”. The new zones have greater testing, vaccination policies, and when cattle test positive for brucellosis the whole herd doesn’t have to be killed leaving the rest of the state to conduct business as usual with their brucellosis-free status intact.

These changes were opposed by one of the big Montana cattle groups who liked holding the states hostage so that they could leverage all of the ranchers to oppose allowing bison to leave Yellowstone. They thought that those poor ranchers in the brucellosis surveillance zone would be given an undue burden and would suffer more than the rest of the ranchers because they were more at risk of having an infected herd.  However, according to the Montana Department of Livestock, the new rules have resulted in “an annual economic benefit of $5.5 to $11.5 million to livestock producers statewide.

While there have been big changes to the brucellosis policy only a few things have really changed on the ground for wildlife. The big change, but in my opinion one that will have only a minor change on the ground, is an adaptive management change to the Interagency Bison Management Plan that would allow bison to use the Gardiner area north to Yankee Jim Canyon, where they have built a removable cattle guard in the highway with a corresponding heavy duty fence, with a little greater tolerance than they were given before. Buffalo will still be hunted and they still have to be back in the Park by May 1st of each year.

Of course, not being content to show any tolerance for bison outside of Yellowstone (and barely any inside Yellowstone), Park County and the Park County Stockgrowers Association filed a lawsuit in Montana District Court to stop the State’s plan.  Their lawsuit claims that “[l]arge numbers of bison now regularly congregate at school bus stops and other locations, interacting with children, elderly, and other individuals that live in the area to a degree not previously encountered,” (hmmm… where have we heard that before?) and that they threaten the livestock industry.

Montana District Court Judge E. Wayne Phillips has granted Buffalo Field Campaign and Western Watersheds Project the right to intervene in the lawsuit writing: “under the Principle of Pluralistic Democracy, different viewpoints create different pressure points that result in unique organizational structures” he also foresaw additional litigation if our perspective was not represented before the court.

Montana’s Supreme Court has set precedent on similar claims of damage or harm by wildlife, ruling in State v. Rathbone (1940): “One who acquires property in Montana does so with notice and knowledge of the presence of wild game and presumably is cognizant of its natural habits. Wild game does not possess the power to distinguish between fructus naturales and fructus industriales, and cannot like domestic animals be controlled through an owner. Accordingly a property owner in this state must recognize the fact that there may be some injury to property or inconvenience from wild game for which there is no recourse.”

The State of Montana has also filed a brief asking that the judge disqualify the plaintiff’s attorney.

Bloomquist is one of the architects of the Interagency Bison Management Plan and state law that makes migratory buffalo outlaws in Montana under the jurisdiction of the livestock department, that is, the Stockgrowers. From 1996-2004 Bloomquist was paid hundreds of thousands of Montana taxpayer dollars under contract as legal counsel and “technical expert” for the Montana Dept. of Livestock, Dept. of Fish, Wildlife & Parks, and previous Governors in several buffalo-related lawsuits. As lawyer for the state, Bloomquist was privy to all of the attorney-client privileged documents he kept with his former clients as Montana crafted legal strategy to stop migratory buffalo from recovering their population and original range. Now, on behalf of the Stockgrowers, Bloomquist seeks to sue his former clients for an “adaptive management” plan he helped create.

The other change is that the State of Montana is now rounding up elk for brucellosis testing and, as a result of that testing, they are expanding the brucellosis surveillance zone further away from Yellowstone.

One thing that hasn’t changed is the desire of the livestock industry to round up all brucellosis infected wildlife in Yellowstone in a pipe dream effort to eradicate brucellosis.  Hopefully the changes in the brucellosis rules will dilute their power to even try something that would surely be a colossal waste of taxpayer money and wildlife.