Ethics, safety, and fair chase hunting demands people should not be able to bait coyotes and engage in “recreational” hunting from their easy chair next to their window-

On this blog we have often talked about the disproportionate favoritism that hunters generally receive over other users of wildlife. Well, recently one of my radio-collared eastern coyotes/coywolves (a 41 pound adult female) was shot and killed on Cape Cod, Massachusetts. Suffice it to say, evidence pointed toward her getting shot on a bait pile within about 100 feet of a house. And it seemed pretty clear that she was shot from within a house. Naturally, I was furious and frustrated by this event having radio-tracked her for four years. However, what amazed me most was when I did some digging (with the help of others), I found that two laws actually allow this type of unethical hunting practice. They are 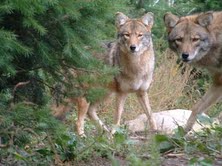 Massachusetts General Laws Chapter 269 SECTION 12E, and Chapter 131 SECTION 58 – I detail those below. Because baiting of these animals is legal (Massachusetts Hunting Abstracts) in Massachusetts and night hunting is legal, that means that someone can bait these animals in at night and shoot them from an open window within their house. Believe it or not, I am learning that this is not all uncommon and probably results in over half of the coywolves shot in Massachusetts every year. The only requirements are that: (1) the person has a $30 hunting license (no tag required to shoot them), (2) the person lives in a rural area where they are at least 500 feet from another house – 500 feet is not that far by the way, (3) or they live within 500 feet of a house but the neighbor(s) allows such activity.

In my opinion, this is a perfect example of how and why hunting laws are antiquated and not within favor of the vast majority of the public, let alone most of the hunting community that probably wouldn’t think this is fair chase or ethical. So, when we read about snaring of bears in Alaska, it is important to recognize that there are lax (for lack of a better word) game laws throughout the country. Hopefully a new and revitalized wildlife management agency, eventually with input from non-consumptive users (e.g., scientists, wildlife watchers) will change these laws to make such practices illegal. However, as most of us know, just about all state wildlife agencies are ultra-conservative so change is difficult, unless they want it. So, for example, it would take about 2 minutes to write a law stating: “It is illegal to bait an animal within 500 feet of a house for purpose of shooting animals/coyotes for recreational purposes.”

However, for all intents and purposes, the only laws the wildlife commission in Massachusetts seems to change are ones designed to increase hunting seasons (recently on deer, bear, and coyotes/coywolves) to support the one percent that participate in hunting. While this post is not intended as an anti-hunting rant, it is nonetheless significant that the state of Massachusetts permits gang hunting and driving deer where people section off large patches of pitch pine and scrub oak woods and blast whatever deer runs by (a practice known as “if it is brown, it is down”). My guess is that this is not the vision that most people get when they think of Massachusetts and wildlife. And, furthermore, you can probably guess my predicament, since these are the same people that issue research permits to simply study them. It would be cool, in my opinion, if we could generate a list on this blog of these type of hunting practices in each state or region of the country.

Chapter 269, Section 12E. Discharge of a firearm within 500 feet of a dwelling or other building in use; exceptions

Chapter 131, Section 58. Shooting upon or across highway; hunting near dwelling

A person shall not discharge any firearm or release any arrow upon or across any state or hard surfaced highway, or within one hundred and fifty feet, of any such highway, or possess a loaded firearm or hunt by any means on the land of another within five hundred feet of any dwelling in use, except as authorized by the owner or occupant thereof.

Jonathan Way is the author of Suburban Howls, an account of his experiences studying eastern coyotes/coywolves in eastern Massachusetts. He also has a business Eastern Coyote Research (www.EasternCoyoteResearch.com) and is currently seeking an institution that will support him and his research. He currently works seasonally for Cape Cod National Seashore, is a part time post-doctoral researcher with the Yellowstone Ecological Research Center, and is a frequent traveler to the Yellowstone area. He is currently seeking a publisher for 2 different book projects: “My Yellowstone Experience” and “Coywolf”, both of which are nearly completed including with pictures.