WWP lawsuit: Sheep hurt sage grouse at Craters of the Moon National Monument Do you have some interesting wildlife related news? Feb. 23, 2015 edition

Mild winter on National Elk Refuge, but near record number of elk on feed

Since 2015 began, the winter in Jackson Hole, Wyoming, has been the mildest in the memory of most folks.  As a result, the almost snow-free National Elk Refuge would be expected harbor only scattered elk, and the elk there would not be chowing down on compressed alfalfa pellets. They would not be fed. 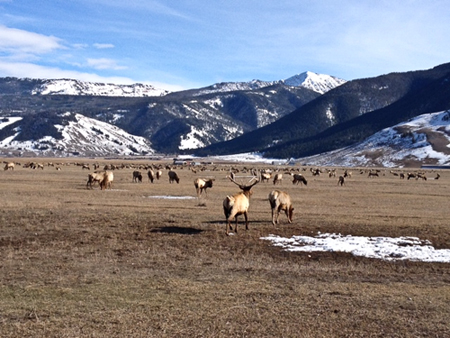 Lot of elk on the Elk Refuge despite a very mild winter. Photo Feb. 2015 by Lloyd Dorsey

In 2007 the Bison and Elk Man-agement Plan for the next 15 years was adopted for the elk refuge. One of its goals was to reduce the number of fed elk to 5000. The purpose was to reduce the amount of brucellosis transmitted and to forestall the appearance of dread chronic wasting disease (CWD).  The higher the number of elk concentrated unnaturally on the Refuge, the more opportunity for disease transmission.

Now in the mildest of winters with CWD closing in on Jackson Hole, the number of elk currently being fed is a remarkable 8390. This is the most since the 8494 fed in 1998.  This figure is not all that exceptional though because last winter 8296 were on feed at the maximum.

43 Responses to Mild winter on National Elk Refuge, but near record number of elk on feed